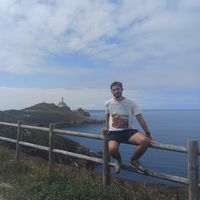 ABOUT ME
This year I start to work as a teacher of Geography, History and Spanish Language, "lost" in Flumet, so I am really eager to know new people. In the past, I was teacher of Spanish Culture in a high school here in Warsaw. Previously I have studied in different countries (Spain, Poland and Denmark) History and Political Sciences.

After a couple of years outside CS world for different reasons, I would like to restart again. I started when some friends told me about Coachsurfing, they told me it was great, not just to economic question, but also, and specially because you can really know the people from the place, so I say, let,s try!!! and i,m convincing myself that this is a really great idea.

I did once in Aarhus, with a French guy, and he was really nice, and the experience was so positive. We were talking a long time, despite he was busy with his studies, and we could practice French and Spanish. Apart of that, I also tried in Freiburg, with a really nice girl who was very kind in all the moment. Last year I was totally out of CS due to "personal resons" and the fact I did not have an appartment "on my own" but I would like to recover this experience.

I really love read books and the list of my favourites would be quite big... but if I have to highlight some of them I would say Othello, War with Newts, Madame Bovary, Brave New World, Zorba the Greek, the Leopard, The Citadel, Frankestein, A Confederancy of dunces....

I was living one month with a Moroccan family in Kenitra, during a volunteer project.