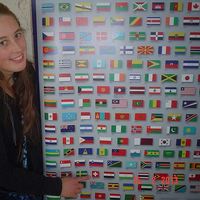 rather shy
more listening than speaking
like to smile, very optimistic
interested in people, cultures and languages from all over the world (but especially Northern Africa, Middle East and Eastern Asia)

If ever you cant find hosts in Mauritania anymore due to the recent changements of CSing policies, try to find us on BeWelcome.org . This is a free alternative to CSing with a growing and active community. Mauritanians CSing community is shifting there, as most of our profiles are not accessible anymore.

I will be very glad to host you if it's possible.

mainly hosting...
and a little surfing in Morocco, Mauritana, Senegal and Switzerland

Bible and
anything romantic :P

Spent a year in Mali, Western Africa. Amazing country with amazing people. learnt really a lot from them!

Moved to Mauritania. Even more amazing than Mali...

teach the gospel
learn languages (as many as possible, but mainly Hassaniya-Arabic first now :D ...)
teach about Switzerland
teach some German/Swiss-German or French (for beginners)