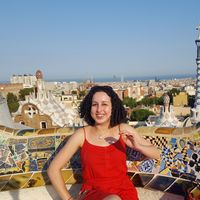 I studied Modern Languages and Literature in the UK and I'm always interested in learning more about different cultures, places and languages.

I grew up in Cambridge and have also lived in France and Brazil: the Couchsurfing network really helped me feel at home in both places.

I often meet up with couchsurfers in Oxford and Cambridge, UK.

Current favourite film: Wild Tales / Relatos Selvajes.
Current favourite author: Colm Tóibín .
And music - I like almost everything. Right now I'm listening to a lot of Brazilian artists like Caetano Veloso and Gilberto Gil (who I saw live in London this year!)

Sleeping in a hammock on a beach in Canoa Quebrada, Brazil - waking up on the empty beach was great.

I enjoy helping people with English.