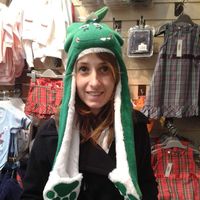 I am pretty laid back and love to meet people! I've lived in quite a few places around the world and have no plans to stop moving about. I've just finished my masters degree in Northern England and am now spending the next few months exploring South East Asia.

I love to meet new people

I love music, if there's live music- I'm there.
I also love traveling, but I think so does probably everyone on this website...

The Strokes, Black keys, Mad Caddies, The Cat Empire, Arctic Monkeys, and basically anything else.

I took a 2 week long road trip with some people I didn't know very well in a RV through the entire coast of California, with an emphasis on the redwood forests

I'm happy to help out in the kitchen, I've been known to make large Mexican inspired dishes (if I can find the right ingredients). I want to make friends along the way and then hopefully be able to host you in California, or wherever else I might end up!