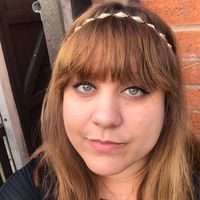 These days, I mostly do hosting in Liverpool, but I really hope getting back on the surfing train soon.

I've surfed many couches around Europe, and hosted even more. I've also participated to a few CS gatherings in Paris, whether brunches, dinners or pic-nicks. I used to make a list in this comment tab, but it got so long I could no longer keep track. If you want to know more, please refer to my references.

My three greatest passions are music, travelling and human beings. When I was in my 20's I used to combine these 3 passions by following my favourite bands all around Europe and crash on Many CS hosts' couches.

I'm a huge nerd, therefore I spend incredible amount of time geeking out. I'm curious about anything, I'm always on the quest of new knowledge. I try to read as much as I can, a bit of everything. I'm the type of person who could talk for hours about Harry Potter or the Beatles, among many other examples. I enjoy making theories about my favourite fictions, and I watch many YouTubers when I'm bored.

I also enjoy every form of art (cinema, paintings, photography, dance, theatre, etc). I like going to concerts, restaurants, hiking, chatting until 2AM, dating, etc.

Music is everything to me, so the list is goddamn long, but here are some examples: The Beatles, Arctic Monkeys, The Smiths, White Lies, The Rolling Stones, The Kinks, Led Zeppelin, Jimi Hendrix, anything on the Boat That Rocked soundtrack... etc .

My tastes in movies are not always so cool, but my top4 is fine: The Boat That Rocked. Eternal Sunshine Of The Spotless Mind. Amelie. Moulin Rouge.

Books: Favourite author is Anna Galvada from my homeland, but I enjoy reading poetry, fantasy and musician biographies as well. But my favourite books ever are the Harry Potter saga.

Singing with strangers on a train.

Climbing on top of La Dent Du Chat, a mountain in Savoie (France). The view was absolutely breathtaking.

Running into a chamois (it's kind of a mountain deer) while hiking in the moutains. It paused when seeing my friend and I, and we stared at each other for several long minutes. It looked as intrigued and amazed as we were!

Having a song dedicated on stage by three of my favourite bands.

Oh, and I've already slept under a bridge. in Summer, in London; it wasn't that terrible.

Skinny Dipping in the Channel sea.

Running in my knickers on a car park.

Getting an interpreter job with Spanish tourists two days after I was hired, whereas I actually can't speak Spanish (but somehow I can make people believe I do). Was dead nervous but they left happy, against all odds!

In addition of the classic answer of the native language, I can teach you everything I know about the Beatles, as I’ve been a Beatles tour guide here in Liverpool.