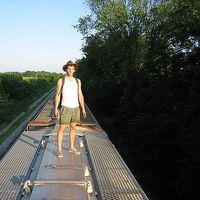 Moved high up in a canyon in Malibu to bring a farm in disrepair up to a better standard. Playing in the ocean and surfin' a lot of afternoons. Just enjoying being in such a beautiful place - (the mountains in one of the pictures is my backyard). Looking for good people to trickle through!

If I'm in town, you're welcome to stay.

My first couch surf led to a bed and a chance to pay
rent. Was wonderful. I lived with a motley crew in
Dublin, all who had done both hosting and surfing.

Did a good deal of couchsurfing before I knew the site existed...

Went train-surfing recently, uninvited; we carabined ourselves to the top of a corn freighter, and rode through the cool, galloping evening wrapped in our sleeping bags, rum in our bellies, noses wet with pure drops of air.