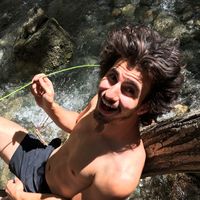 I am currently studying a master degree in sustainability in Lausanne. My goal was totally different in 2010, when I finished school. I first wanted to become a successful bank advisor in an international Swiss bank. After only a year and a half of hard work, I realized that I was totally wrong about this path. So, I knew what I didn't want in my life, but it was harder to know what I wanted. I can now confirm that my steps took me in a much fulfilling direction...

I consider myself as a seeker. Apart of trying to know myself better and respect my deep nature, I am also doing my best to live my life in a more sustainable way. In consonance with that relatively new inspiration, I am changing my customs step by step.

I believe that people are fundamentally good, and that small changes can carry big ones. My philosophy could be resumed in Gandhi’s quote: “Be the change that you want to see in the world.”

I am also passionate about outdoors sports, because they make it possible to explore wide and wild places. It’s also a way for me to improve myself physically and mentally. As you could imagine, I am more a nature person that a city one, even though I believe that cities could be motor's of bigger changes in our society.

Art, music, and spirituality are knowledges I would love to cultivate. I see them as I see languages: an alternative way to enter in communication with both nature and people.

Because I think that people are the mirror of ourselves, and meeting them is a great way of knowing better about one's self.

You will probably learn about it, if we meet together.

I have learned to make homemade chocolate, a way to replace my Nutella compulsive addiction.

Time, as I see it as the most precious thing I can share with you.