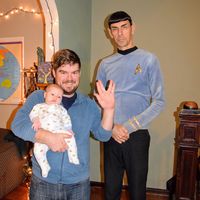 As of January 18, 2017, there is a new human living with us. It's a clever little thing, and it seems to like guests, but we may not be hosting as much as we used to for a little while. Feel free to send a request, but please don't be too offended if I take a little while to respond or can't host. Baby life is crazy life. Also, obviously, we probably can't host anyone who's allergic to infants.

To make it back to Cleveland

Stories are great, and I've got a ton of them to swap. Cleveland is actually pretty awesome, despite its bad rep. Sailing with the right people is about as good as a person can do for themselves. The fire pit in my backyard is a claw foot tub. This last bit is no longer true. But I have a space toilet now, so it's all good.

Also, because I've been asked a few times:

I am probably not currently in California, Alaska, Northern Canada, or Louisiana. In all likelihood I am in Cleveland right now. I'm not sure why, but apparently CS seems to think I travel a lot more than I do, or there is some wild vagabond doppleganger out there logging into my account for some reason from various locations all over North America. (If you're reading this, doppleganger, do your thing man, so long as you do it well). Either way, you can largely disregard the location of my last login above and to the left.

I have no idea what I'm doing or why.

My couch has seen a lot of surfers, both the pass through kind and the you know what, I think I might just stay for a while kind. I welcome everyone.

I'm becoming something of a prolific host. I've done my share of surfing, but that was back in the day when you had to find strangers on the beach.

I've also hosted a bunch of bands! Here's the playlist...

Hand In the Ocean

Jack and the Bear

Food Will Win the War

I attended a barbeque at Winn-Dixie in New Orleans on September 1, 2005.

I know a whole bunch of crap, some of which is more useful, some less. Here's a partial list of stuff I can attempt to teach you to do:

Change your alternator
Click train your dog, even if it's stupid
Cook a delicious squash and apple burrito
Neuter cattle and circumcise children
Capsize a sailboat
Build a house

One of the things I don't yet know is how to say a phrase in every language. So if you have a second tongue, I apologize for staring. If you know another language, teach me while you're here!

If there are any meteorologists out there, the weather in Cleveland has been really bizarre lately and I would love to just stare at the sky with someone who could tell me what I was looking at.