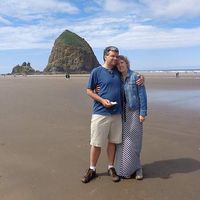 ALERT!! The new management of Couchsurfing.com is deceptive in its billing practices. I expected that they would provide better service now that they are billing for memberships. But when I tried to sign up for annual billing they instead put me on the higher month-by-month rate; when I complained they said they were "unable" to change this, but of course any business can reverse a credit card charge so this means that they are *unwilling* to do so. They have lost my confidence and will soon lose a member unless they can proactively respond to my complaint. Until then I have disputed the charge with my credit card company. Be very concerned about this! Also note that until this is resolved I cannot guarantee that I can respond to communications with other CS members, including ongoing ones recently initiated.

Bookish, generally quiet, love to talk about science, philosophy, history, space, the future, literature, and how the world works.

I grew up in Minnesota and have lived in various places around the Midwest, but just moved to Puna in Hawaii's Big Island. Note that while we earlier verified our ID's and address with Couch Surfing, we are currently listed as unverified because Hawaii has tremendous delays with assigning new IDs, so we are still relying on our MN driver's licenses to get around.

I'm a mid-career philosopher developing a theory of the foundations of ethics. Basically ethics is about doing things that you can value anyone doing, including the ways you describe, think about, and choose your values. I'm especially interested in moral universalizability tests, where I've made two major discoveries which seem to have escaped most other philosophers: 1) there are two distinct types of such tests, which often get confused with one another and treated interchangeably, even though one of them is utterly wrong and the other is correct (see if you can see which is which--they are embodied in the two questions "what if everybody did that?" and "how would you like if it someone did that to you?") 2) all such tests work better if applied recursively, i.e., to itself or your method of choosing and describing the behaviors put to the test. I.e., if you think you have a counter-example to such a test, ask yourself if you would want other people to regulate their behavior by *that version of the test, as you have interpreted it, in such a way that allows that counter-example!* The answer will be no, so then ask yourself what version of the test you would want others to use, to avoid such counter-examples...that will lead you to the *correct* kind of universalization test.

I travel a lot speaking both at professional conferences and public venues, especially for student groups or clubs, churches, etc. I defend a ethics of liberal freedom of choice, but avoiding relativism.

I've been more of a surfer than host, but bought a house with more space in 2014, and one night had 3 or 4 visitors in a traveling band; more recently we hosted almost a dozen people, but not through couchsurfing. We now have a new home in Hawaii with space for a few visitors at a time.

I've been using CS for almost ten years now and enjoy talking to people about "real life" in places I stay. We don't have many local CS events or groups, unfortunately. I've couchsurfed around the US, a few spots in Europe, also through Tahiti, New Zealand, and Australia, and have met amazing people in all these places.

I read widely on philosophy, science, history, and great literature, and love hiking, especially in rocky areas. Interested in couch surfing as an alternative to stale hotels/hostels, to meet local people and find out about local culture, food, events.

I love the "great books" of civilization more than most contemporary works, though also I love reading about recent breakthroughs in science or grand sweeping histories of the world or of great turning points in human history. Movies: again, I love any great classics, but especially films that make you think, that deliver the unexpected, or have many levels of meaning (I just saw "mother!" and liked it--once I realized what it was about, which actually was only after I watched it one time through!) I have a little fondness for SF, but there's a lot of bad SF so one must be wary. Music: love 70's rock, and also just rediscovered my love for Herb Alpert.

Standing on a Native American mound in Louisiana, shaped like a bird--on top I could feel the wind, and could really appreciate how its builders might've seen this as a way to access some kind of bird spirit. I felt a less spiritual, more physical wind at the Pali Lookout in Oahu--it was so strong and (mostly) steady I could literally lean into the wind at a moderate angle and continue standing. Also on Hawaii, I walked around the west side of Oahu from road-end to road-end, quite the journey but I'd love to do it or similar hikes again. Ask me about my five minutes in Sweden.

I'm a ringer in trivial pursuit, except for sports, which I am quite indifferent to. I know the name of the first city in the world, the history of the Suez and Panama Canals, and the reason why you can't find samples of the element Technitium in a chemistry lab.