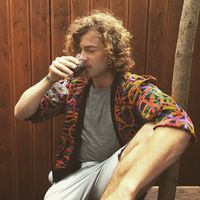 See and experience as much as I can, as young as I can.

I'm Tom. Since graduating I tried my hand at acting for two years, then I spent a year in Greece volunteering with refugees. Now I've been forcibly settled into a 'normal' job for the time being and have realised just how much I've let all my travelling ambitions slip! I am now attempting to rectify this.

To try and be present - easily said, not so easily done. Far easier when you're travelling though ;)

Hosted some wonderful people a few times now. Couchsurfed only once myself without having known them already and that was within my own country. I'm therefore looking forward to having my first true experience with it abroad!

Music wise I love CVRCHES, Everything Everything, Allo Darlin, The Naked and Famous, Missy Higgins and countless it's criminal not to mention. My absolute hero though is Bruce Springsteen.

The lion king is of course the best movie ever made and a close second is High Fidelity. Recently I've loved Boyhood, Blue Ruin, Before Midnight, Anything written by Martin McDonagh (seven psychopaths is the best), La Haine, Perks of Being a Wallflower, The Big Short.... Also - How to Change the World one of the best documentaries I've seen of late and on that note Hyper-normalisation was also fantastic.

Book-wise I read a bit too much generic fantasy and bits of politics when I have the brainpower but I have been branching out to all sorts - always on the look out for recommendations. Recent favourite was the unbearable lightness of being.

I was a page boy at a Cambodian wedding :)