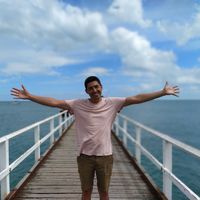 I really don't like these kind of descriptions because I could say I'm a very shy person or a very enthusiastic one, but that will depend of the situations and the surroundings. But, making an effort, I must say I'm a dreamer with tendency to live in the past and the future, so I'm tring to bring some "mindfulnes" to my life (Rather than being stuck thinking too much ...). I'm a tranquil guy. I must say I'm a smiling person. If I dont smile at least once in the day there's must be something wrong. I believe in the personal growth (what else we could do?), I'm trying to make it real even if sometimes it's hard (It MUST be hard, isn't it?). What else? Well I don't know, that's what I see ... what do you see?

mmm, that depends of the day actually. There are a lot of quotes I like, here some examples:
"Happiness only real when shared"
"I know how important it is in life not necessarily to be strong but to feel strong"
"No change of circumstances can repair a defect of character"
"Things do not change; we change"
"El pasado fue y el futuro nunca es" (CHC!!)
"We can always understand that sustained effort will have to be made in the best apparent direction ... instead of being paralyzed by indecision and fatalism"

Sometimes I go to meetings, but lately not too much. Right now receive some sufers is complicated but I wish to do that someday, and I'm hoping to surf again, very soon!!

Only excellent experiences, nothing to say. In the beginning I was hesitant about the CS's system and I didn't believe this could work. But with the very first experience all that change, I'd founded marvelous people, and still have contact with some of them, you can really make very good friends with this. So, a lot of good experiences and waiting for more.

Right now and always the personal growth is there. On the other hand I love to travel and I would like to make that a way of living, I never moved too much but tasting the flavor of being in other part of the world with other cultures and people is absolutely awesome and intoxicating. I like to talk and telling some (not very funny)jokes about nothing while sharing a good beer (wine, water, tea or nothing ... who knows). I also like to walk, only for the pleasure of walking, and sometimes run (when my knees let me). New languages, cooking, playing guitar (well, learning how to and stuck in it :/) and looking for new interests.

Let's start with books because is something I picked up recently, after my lazy period. I love: Le comte de Monte-Cristo, Cien años de soledad, When Nietzsche wept, La Cité de la joie, Un arc-en-ciel dans la nuit, The Call of the Wild, Lord of the Flies ...
Music, lately I have focussed in Indie and folk music, some groups would be: RHCP, CHC, The decemberists. Little Joy, The killers, the arctic monkeys, Beatles, Matt costa, Jack Johnson, Donavon Frankenreiter, Eddie vedder, Mumford and Sons, Frank Turner, The Temper Trap, Edward Shapre &amp; TMZ, Cat Empire and so on. And some classical music too!
Uff, movies, in general those wich make you think a lot and have plot twist, something not so predictable. Not a lot of comedies, something like: Hot Fuzz o Shaun of the dead (Yeah I like British humour). Others movies: El orfanato, Good Will Hunting, Memento, Following, Into the Wild, Nueve reinas, El hijo de la novia, The usual suspects, Fight club, The Kid, Dreams, Waking life, Before sunrise, 500 days of summer, Le scaphandre et le papillon, Amelie, A beautiful mind, Lords of Dogtown, Nuovo Cinema Paradiso, Stranger than fiction, American beauty ... etc.

The travel by train in Europe, because of the challenge, the experience, the places and the people I met. That makes me realize a lot of things (even if those things are not yet mature) because of the independence feeling and not too much because of the cold. Honorable mention for the exchange semester in Nice, such a wonderful experience, being by my own (well, that's never truth), a new culture, a new language ... fantastic.

I hope to learn everything that could be learned but if I have to say something specific, that could be a good recipe (I love to cook!). I like to learn languages too. In the same way I could teach some stuff about that too. Music, movies, n'importe quoi!