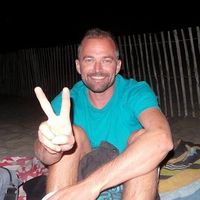 I always try to have the best relationship possible with people i meet. The only persons i dislike are feminazies.
I really enjoy practising all kinds of sports, and playing music ( guitar, drums, and sing )
Playing soccer on the beach, then swimming, then talking or playing music may be very pleasant :)
I always enjoy to meet new people.

act with respect of everything that is liveAbout the negative note on my profile : That person acted like a feminazie.
She asked for hosting, i answered i was not sure to be able to host, but that i d would be to help.
As she never answered, i sent her a message later when i reminded this. I never met her.
She got crazy, and finally insulted me, and posted my photo and personal phone number, everywhere on the web, on her website, facebook, twitter and so on.
And gave a me a negative recommandation on couchsurfing, my first and only negative.
And that negative recommandation is still here, though i asked it to be remove, that's why i leave this one, othewise, i would have no interaction, and i dont recommand to have any.
She also criticized couchsurfing, and people that helped her and she met on her trip, though she used it a lot. Unbelievable and always surprising kind of person.

i try to host when i can, otherwise i can give advices on my area, or take a drink

good, except with parasites that don't know what respect of other is

participated as a volonteer in french world cup of soccer in 1998
...and many other crazy things ;)

can teach computers and Internet, french