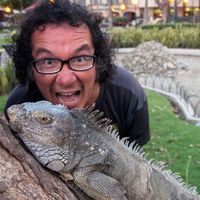 Traveling, cooking, drinking, writing (not necessarily in that order)

Born in Peru and raised in Canada, I am a savvy traveler with epicurean habits; also welcoming and friendly as much as I speak my mind. Give it a try, maybe I'll host you.

I was born in Lima but grew up in Canada. At the age of seven, my folks returned to Peru. Homesickness they call it. Some years later, in school, I wanted to be an archaeologist. Then I started to play the french horn in high school (I had this terrible crush on my music teacher's daughter) and that started my passion for music.

After some years of studying music in Peru, I went to Chile to continue my music education. It was 1988. Pinochet's regime, one of Latin America's longest dictatorships, was voted out through a plebiscite. A democratic regime was elected and Chile suddenly got highly interesting. There was a lot happening and I was eager to submerge myself into it all. That's when I realized I wanted to become a journalist.

I've been described as a warm and generous host, a helpless foodie with decadent, epicurean habits, an ultimate conversationalist, and a knowledgeable person. But I also have been said to be quite opinionated and arrogant, or "pretending to be god because I think I know everything" (direct quote from a couchsurfer!) I should admit all of the above can be true.

I am very passionate about my culture and love to share my travel knowledge with anybody that is interested. I enjoy hosting people, cooking for my guests, traveling and trying to keep fresh my sense of awe, enjoy the simple things of life, despite my cynicism. I speak up and generally have strong opinions about what I think. I don't consider myself a politically-correct person. Honesty and straight-forwardness, for me, is a precious virtue. I become highly suspicious about people that tag themselves as "open-minded" because most of the time they actually end up being quite conservative or, worse even, fucking uptight. I also have a difficult time trusting people that don't drink because they usually hide their control freak attitude.

Last but definitely not least: I have a great sense of (dark) humor. Can't help it. But if it makes you feel better, I've learned to laugh at myself too.

I am a print journalist, travel and food writer, tour conductor and tourism specialist. I contribute for magazines and publications in South and North America, as well as Europe. I've co-written or updated travel guidebooks such as DK's first edition of the Peru Eyewitness Travel Guide or the Peru Moon Handbook's third edition. I've also worked for the National Geographic Society and published in the NG Traveler magazine. I am also a travel specialist, guide, interpreter and design tailored-made travel experiences for private groups.

My Instagram accounts:
theperutravelexperience (Peru in photos)
viajeroyvagamundo (my travel and food experiences)

No idea. When I'm in Lima I combine my time hosting couchsurfers, looking for an unusual story to write about, cooking for my friends, setting out a plan for my next travel or hopefully making some progress writing a book in Spanish about my travels. Once I finish it, I hope somebody is bored enough to buy a copy and read it!

"... as the world has become smaller, so its wonders have diminished. There is nothing amazing about the Taj Mahal, the Great Wall of China or the Pyramids of Egypt. They are as banal as the face of a Cornflakes packet.

Consequently the true unknown frontiers lie elsewhere.
The duty of the traveler, of the voyager is to open up new zones of experience. In our overexplored world these must of necessity be wastelands, black holes, and grim urban blackspots: all the places which, ordinarily, people choose to avoid.
The only true voyagers, therefore, are anti-tourists.

Following this logic we declare that:

Excerpts from the resolutions passed at the First International Congress of Anti-Tourists at the Shymkent Hotel, in Shymkent, Kazakhstan, October 1999. From the book "Lost Cosmonaut: Observations of an Anti-Tourist" by Daniel Kalder, 2006.

I have hosted travelers and friends as long as I can remember, way before CS2 existed. I used to share a flat with a very good friend, and we once had around ten people camping out in the living room! I don't do that anymore and rather have one or perhaps two guests at a time. But it's fun to meet people, exchange travel experiences, learn in the process, grow a network, and possibly make good friends.

Check my references below.

Couchsurfers I have hosted:

Too many to be listed here. Better ask me if you have the pleasure of meeting me!