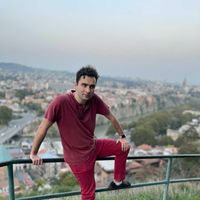 Haven't been in Russia for more than 2 years
Let's make couchsurfing great again!

I'm Sergey, an English teacher in Asia since 2019
Grew up in Russia, 've lived in Armenia, have been toiling in China, then in Vietnam, and here I am!
I like classic movies, MMA/boxing, literature, table tennis and insane trips.

Movies: Oldboy (2003), Once Upon A Time in America, L.A. Confidential, Full Metall Jacket, In Bruges, Three Billboards, Hunt (2012), En Ganske Snill Mann (2010)... To he honest I'm really deep into this industry and can narrate for hours about history of the cinema :)

Games: Deus Ex 1/Human Revolution/Mankind Divided, Castlevania SOTN, Mafia 1, Red Dead Redemption (both), Gothic 1-2, Witcher 3, Legend Of Zelda BotW... Yes I like games despite lately not have a lot of time for this :(

I won some ping pong (table tennis) championships back in my school days.

I used to work in China as an English teacher in a private middle school and in kindergartens.

I was in Petra for free. Maybe you know about how expensive the entrance to this ancient city (maybe the most expensive entrance ticket in the world), but I entered by black hole at the night,despite local guys tried to discouraged me. Fuck this people's because I have one of the greatest journeys in my life :)

I overcame more than 60 km by foot in one day on the way to the top (and after - way down) of the Alp mountain peak in Innsbruck🇦🇹.

I've spent a night in a forbidden house near the Prague's city center. That was an insane day overall before that but I can't write about it here

I served in Russian army in 2012-2013. In a half of a year I existed in the Gumry's Russian military base (Armenia). A a lot of things happened in this period.

We can play some table tennis matches or chess.
I able to cook, but most of the time I'm too lazy :(
I can solve problems with your computer.