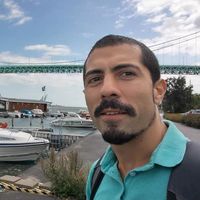 To erase my own limits. To draw new lines and to be always a sketch made by an unpredictable hand. To see the world with everyone's eyes. In the end, nobody wanted to settle down.

Thoughtful, curious, critic, passionate about each single thing I like.
I'm a wide range hedonist. Being isolated on dark, rainy, gloomy days are as inspiring to me as being surrounded by many smiley people out in the sunshine on a beach. I like to shout out loud with cheerful new friends on a funny bar, and I also meditate on a bus ride watching random people faces. A solo traveller most of the time, willing to interact with every single person that has a story to tell.

I can be catalogued tho. I'm a psychologist with a strong social approach (I used to work with kids in social risk), a human sciences enthusiast, an avid reader and a not that good writer. I discuss in excess about politics, defending minorities with a queer and decolonialist emphasis. I am usually annoying to privileged people defending coservative morals, but don't you worry, people I met say I'm kind and easygoing :) Oh and I love to travel, yes...

Hosting and showing around the city, being hosted and meeting new people in different cities. I also participate in CS events from my city and from other cities of the country.

People from different parts of the world have stayed at my home, and I've taken long time to show them around and to introduce them to my friends. I have also been hosted in my many trips, meeting unforgettable friends.

My lists are endless but here goes a sample:

Films: a lot of art cinema, european films, independent films in general. I like to follow filographies, my top directors are Kubrick, Lynch, Vinterberg and von Trier. Getting more into Bergman lately.

Music: alternative rock, indie, punk, folk and some introvert pop music. I have my moods, sometimes I need Nirvana, Pearl Jam or some other grungie bands, sometimes I need sad introvert solo artists like Elliott Smith or Sufjan Stevens, some other times I need to sing along some indie anthems with Arcade Fire but I also enjoy to jump and mosh in hardcore punk concerts (IDLES is the band I'm loving nowadays). I do also listen a lot of argentinian rock, ask me for suggestions!

Books: I read a lot of stuff related to politics, philosophy and psychology. I'm into queer theory and decolonial movement lately , but I also do classics. Foucault in Europe and Galeano in Latin America are two of my favourites, but the list is long. I read novels and short stories from time to time, Dostoievsky and Kafka are my favourites.

Helping someone to change his life.

Cultural exchange is all what I aim for

I'm a good companion, we can spend time talking, sharing a meal or grabbing beers. I'm very tidy and keep everything clean :)