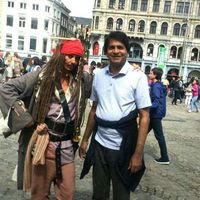 Primarily with the object of projecting soft image of Pakistan and hospitality of Pakistanis since joining Couch-surfing in May 2018 I have officially hosted 170 plus surfers from 40 countries.I have hosted even at times when I was myself out of country. Since majority were couples/group/family therefore number of individuals hosted is well over 300. I have hosted the highest number of surfers at Lahore/Pakistan.

I am Tax Consultant by profession and on an average in a year live around nine months at Lahore and around three months at England/abroad. Due to dual nationality and UK passport it is easier for me to travel on the go and I do so off and on.

Our grown up children are doing very well in their career and life at Ljubljana, London and Stoke,so we as parents can tavel frequently as and when desired .

I am keen to meet new people by hosting foreign guests and to project soft image of Pakistan and of Islam and I am very satisfied with the results of my efforts.

Our family house is located in one of the most secure area of FCC, Gulberg, Lahore and one private ensuite rooms is earmarked for CS travelers. Large basement is used for CS meets up of travlers and their hosts.
I am found of attending sporting events around the world and have been to Lords Cricket Ground London, Wimbledon London, foot ball stadiums of London, Manchester , Barcelona and Real Madrid Clubs. Recently visited Samara and Moscow at Russia to watch World Cup being played with football made in Pakistan which was a pleasant surprise for most locals and international visitors with whom I interacted.

I am good listener though have lot of life experiences to share especially that my career progression is mainly due to habit of reading newspapers since childhood.

Adding two local and two international friends each year is my resolution because friends have helped me a lot to become high achiever in life and now it is my turn to support others.

Meeting new people while hosting them is a pleasure . Surfing while traveling myself is not on my agenda unless specifically invited by someone to whom I had hosted.

Prolific reader of newspaper and magazines only, like subscriber of National Geographic and Times for decades.

Arranged TV coverage on prime networks of some of the unique guests staying with me . Coverage projected image of Pakistan as a tourist destination.
Beside that help of local needy students especially of females whose education has not been priority of parents due to their financial constraints.

I am 60 plus but still learning things to do and things not to do . Sharing same with other.