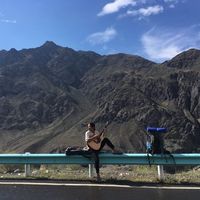 I just now be able to contribute back to CS community to support others a place to stay in Gambia on February 2023.I am still in my trip to all West African countries now，already been 🇲🇦Morocco 🇲🇷Mauritania 🇸🇳Senegal and now in Gambia and next will be in 🇨🇻Cape Verde..And more..until 🇳🇬Nigeria..And recently I will just stay a little longer in Banjul.

Been visited 106 countries since 2012. And I plan to reach all countries in the world.🌍Not in a rush..

So called “traveling” is part of my normal life.

My full name is Shangcong Li and you can call me Shancon.

I began to see places away from the town I grew up since I was a teenager.I didn’t like the school and didn’t like the way they wanted me to go in that time,afterwards,I created my own path and I spent more than half of my life for seeing “something different” or “something new”.

Since 2016,I had my writing blog and since 2020,I had my video channel.微信公众号：在路下
B站&amp;西瓜视频：啊聪zuo
Youtube：啊聪

I make videos and share my experience but I hate people call me “YouTuber” or “Influencer”..

I made more than 400 videos and I got income support from some video platforms in China.And I really love my works.(It was also one of my childhood dream)

I have most of my followers in China but I do also have a English version video channel on YouTube: shancon

Sometimes I do also make performance on the street or in the bar（I always have a guitar with me and I play and sing my own melody in general and I have recorded about 50 songs from myself )But I hate people call me “Artist” or “Musician”.

I am just myself.

To complete my journey to every visit every single country in the world in the next 3 or 5 years.

To across West Africa from Morocco by land border since this winter of 2022.

Time is one of the most expensive thing in life if I decide to spend some time with you that means my especially respects to you.

Everybody will be lonely and always has desire.

Human being are all the same as human being.

I don't like to have any so called “title” for myself，I am just a ordinary humankind like you and others.

To have friends in every country I visited.

To know more about the places I visited from locals or somebody who lives there.

I got on Couchsurfing since 2012 but before that I already did something similar in China in 2011.

I not only stay with the locals and also I did host many travelers whenever I could.Although more of my experience as a host not shown from my CS page.

I had used CS in Asia,Africa,South America,North America Central America and Europe so far.

To have a performance or jam

I write my own song and I dont like dont wanna get influenced by others so Usually I only listen something I don't understand(especially if I don't understand the meaning of lyric or the language) I am okay like this kind.And actually I dont like to call “music”and I dont like the word for example like “Musician” and “Artist”，don’t use it for me although 90% people will relate them to me as I make my own performance with my singing and guitar.

I left my home alone for another town 20km away when I was 12.I did it by bicycle.

I rode my bicycle from Chengdu to Lhasa until everst camp in 2011 and I was 17 years old.

I rode my bicycle from central China to Siberia Russia when I was 18 years old.

I did one circle trip of the planet 2016-2018 from Asia-Africa-South America-North America-Asia,I started it within 15 US dollars..And I was on a TV in Bolivia in 2017 cause of that：https://www.youtube.com/watch?v=-Z9CxKd5HGE&amp;t=182s

I used to live in Lhasa and been twice western part of Xizang（Tibet autonomous region).I did two times walk circle around kangrinboqe mountain in 2011 and 2014.

The highest peak I been so far in my life is 5800 meters high around Kangrinboqe mountain.

I did a month trip started it with “0 money” in Middle south of China in March of 2013.And I didn't carry even a phone..

I hitchhiked from Beijing to Moscow then until Murmansk in 2014.

I hitchhiked from Buenos Aries to Ushuaia then to northern Chile in 2017.

I had ever been robbed by a guy who has a gun when I was hitchhiking in Russian Siberia in 2013 but eventually I grabbed his gun and threw it away,I ran to a passing car and I were saved by them.

I walked from Lhasa，China to Kathmandu，Nepal only walking（55 days）in 2014.Mostly on the national road.But only by walking.

I camped nearby the Pyramid of Egypt and Sudan…😂

I helped non English speakers for translation when arrival in 🇧🇸Bahamas（they asked help），a rude immigration suspect I am a human smuggler then I was forced to detention by 🇧🇸Bahama immigration for 5 days with almost no reason.I were released after my explaining in the 5th day..

I were suspected that I am a spy from US by Iranian police..I were forced to the jail for 15 days in one of my favorite country and also my no.100 country 🇮🇷Iran..I was realeased after they figured out I am just a innocent tourist.

And I am getting forgot a lot of experience from the past..

I would learn more about dancing especially like Salsa or Pachata or any other local culture.

I would learn more about outdoor skills and more swimming skills.

I would try different food and learn more about cooking，like how to prepare different local food from all over the world which I like.

I could share the info which I know about some places.