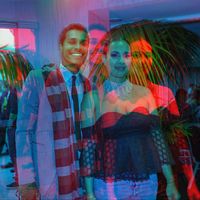 In January 2012 we started cycling from Holland🇳🇱 to Japan; it was our first trip 1.together, 2.on a bicycle and 3. through Central Asia.
By the end of 2012 we reached Japan🇯🇵 by ferry from South- Korea.

After Japan🚴🏻‍♀️ we both went on a different path: Shakura worked in Australia and backpacked through (South East)Asia before working on a cruise ship🛳️ for six months that took her to America.

While Martin cycled🚴🏾‍♂️ through South Asia, the Middle East and North East Africa prior to working in Belgium for a while. Afterwards he went on a roadtrip through the whole of East Europe and then took the cruise ship Shakura worked on to America.

We enjoy meeting people👨‍👩‍👦‍👦 from all over the world and to be pleasantly surprised by the different cultures or countries we never learned about or were misinformed about by the media📽️. From time to time a warm shower is a heavenly experience, since we also do alot of camping🏕️ when traveling.

Onfortunately we're currently not able to host anyone because we're travelling ourselves. But if we have our own cottage🏚️ after this trip we'll definitely keep our doors open to anyone, since that's the least we can do as appreciation for the amount of welcoming, heartwarming💛, informative and sweet people we've met(with and without the help of Couchsurfing/Warmshowers🚿). We've been enormously lucky with having a home every other day on our bicycle travels and very much appreciate that fact🍀.

This link shows the narrative of our cycling trip we took from Holland to Japan(scroll down for English), and is the website of a great tourguide in Tokyo🗼(if you happen to need one):
http://tokiotours.wordpress.com/tag/fietstocht/

We just started vlogging📹 in May 2017 as well:
https://www.youtube.com/channel/UCTBiZntNO5rsYcakpG8s7zw

Shakura; "anything that(intentional or unintentional) gives 'meaning' or 'insight' to ones life: such as religion, philosophy, writings, art, because we're all(a bit) lost without meaning😱.

As well as things that make us happy, and that can be anything, really".

Shakura🌸; "the cycling trip was amazing all over. I love nature and taking two days to get on top of a mountain so I can cycle off it(Tajikistan). Loved our Antarctica cruise as well. Also JAPAN".

Martin💀; "Antarctic cruise. to have climbed Mt. Kilimanjaro in two and a half days. Running half a marathon in seventy-six minutes, dizzy and vomiting but I did it for my little bird that passed away! R.I.P Pietje. Cycling 190km in one day trough hilly Borneo on a full packed bike that weighed 40kg and meeting my girl Shakura".