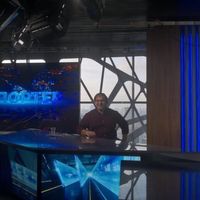 I live in the city of Islamabad: which is a part of the Islamic Republic of Pakistan: which is a part of Asia: which is part of a 4½-billion-year-old planet, Terra: which completes one rotation upon its polar axis in relation to the sun in every diurnal-nocturnal 24-hour cycle and 1 revolution about a type-G star called Sol in 365 days 5 hours 48 minutes and 46 seconds: which is part of the solar system of nine planets and myriads of asteroids: which is moving together with Sol toward the constellation of Hercules at about 20,000 kilometers per hour: which is part of the galaxy popularly named the Milky Way: which is rotating on its own axis every 8 billion years: which is part of a family of many billion galaxies: which make up the known universe: which I suspect is both finite and unbounded, being curved back upon itself four-dimensionally: so that one with infinite energy traveling forever would pass through galaxy after galaxy in a vast space-time orbit coming back eventually to the origin of such an expedition: so that such a one would eventually find again the Milky Way galaxy, the type-G star called Sol, the planet Terra, the continent of Asia, the nation of Pakistan,the city of Islamabad, the street called "The Beginning", the humble abode: where such thoughts were conceived in my mind.

I Fly but sometimes I levitate.:D