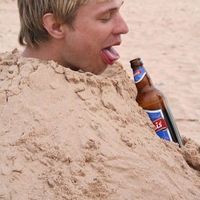 I'm kind of relaxed guy who most of all loves chill, fun and lot of jokes and smiles. I don't like to make troubles or kill my nerves in situations where it's totally useless and I truly believe that this is very big problem for most of people. OK, I said I'm trying to do so :))

I'm not that kind of person who put on the first place carrier or earning money. I'm not that kind of guy who want family and babies aaand.... OK I would have them, but not now. At first I'll enjoy a life, see as many things, countries, cultures as possible and only afterwards I'll put on me some bigger responsibility.

I know how it is to be somewhere abroad in rainy day, no money in the pocket and without a host. That's why I'm trying to help people also with last minute call. As you see, I'm hosting more than surfing and I will do so until I'll have possibility.

Fun - all the time funny stuff, jokes and smiles. More C vitamin and our life will be longer ;)
Sport - especially Basketball. Some kind of dischargin energy.
Chorus - have to practice my musical skills which currently are let's say "not so good".
Travelling - o yes, I wanna more and more...
Hitchhiking - in blood!
Beer - don't give me a lot of it :)
Meet new people - world is so big, and every person is so interesting.

Have been in Siberia in January and at 3a.m. with -30C ordered a beer in a local Kiosk on the street.

Have been kicked out from the train somewhere in the desert.

Was in Georgia and Russia military conflict (2008) epicentre.

Was crossing Azerbaijan and Iran border, when some guy offered his kid with words "No problem, no problem"