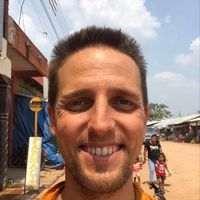 To wander freely wherever my heart desires and my soul's on fire, following my inner compass freely all over this rowdy planet footloose and enjoying as much as I'm learning.

I laugh a lot. I may come across as shy at first but that's just because I'm far away in my imagination somewhere contemplating goofy shit :) I adore experimentation and exploration, and although I love and need an adventurous lifestyle it's a very flexible, laid back type of adventuring. Not a big fan of schedules that can't be rearranged on a moment's notice or thrown out altogether when intriguing new opportunities arise. I have a tendency to be outlandish, outrageous, and outspoken, thought at heart I am tolerant and empathetic and firmly believe in a live and let live lifestyle. I do my best to be gentle and respectful though I value honesty more highly than delicate feelings and thus have been known to step on toes while dancing through conversations ;) In fact I rather enjoy spirited debates, so long as we can finish passionate disagreements with a hug as friends and go about our day in good humor =) As my life is rarely strictly scheduled or structured, I spend a lot of time helping out people I've just met that I take a shining to with projects that catch my interest. When there's a good reason to be happy (there usually is) I err on the side of ecstatic, and I revel in bringing other people up with me. However, I also harbor a distaste for heartless mega-civilizations that trample the living permacultured diversity of tribal rainforests with holocausts of dead pavement and monocrop agriculture to make way for a bland McPlasticWorld Empire, and so in the backdrop of all my playings and wanderings I seek as an alchemist ghost in the machine to bring light into this present darkness and work for the rebirth of Eden &amp; Atlantis in myriad and sundry ways (hey, it's a work in progress!) ;) And lastly, I have forest green eyes that are happiest gazing upon rainbows both in the sky and of people, as well as beholding the finery of nature flourishing in all her splendour =)

The gold of integrity, the wisdom of excess, the brilliance in mad pursuit of truth. That saying about our purpose here on Earth being to live, love, laugh and learn is absolutely wonderful, for surely Life is to be reveled in, enjoyed, and shared with as many dear souls as you can find, and everyone has a dear soul! Money is mightily handy for doing many things in our present world yet nowhere near Real enough in itself to base Life around, so never let it be The Only Priority. Give a helping hand freely whenever you can, merrily and gracefully, grateful for having the opportunity, the means, and the disposition to do good. Love what you do, do what you love, and do it excellently. Always keep your eyes wide open and head on a swivel - so many of the very best things in Life are complete surprises =)

Surf couches and hammocks and floors and king-sized beds in apartments and tree houses and tents and palaces all over the Earth, and spreading the good word about this site to those who've never heard of it, as I believe this website is a great force for good which helps to weave the wildly diverse strands of humanity ever closer together. And last but not least, though I travel more than I am settled, every time I do manage to stay in one place for very long in a house or a hut with extra space in it somewhere wonderful I open it up to host a steady stream of sparkle-eyed fellow travelers to pay that open-heart open-home love forward - and hosting is even easier to do than surfing because you can do it right from home! :)

I've met and stayed with quite a few kind strangers on the West Coast of the US and the islands of Hawai'i, and I've hosted a few tremendously interesting travelers in San Diego, California and the west side of Olympia, Washington, and as well had the pleasure of hosting a bountiful treasure trove of beautiful souls in need of a nights rest on their journey over the past few years living in the mountain forests of Southern Ecuador.

Jungles and rainforests and beaches (the tropics in general really), climbing trees, exploring everything, jumping from great heights into gorgeous bodies of water, the tribal lifestyles of the indigenous most places I've visited thus far in the Western Hemisphere, trying new and exotic foods and then (rep)eating the delicious ones as frequently as possible, writing, permaculture systems of organization that are so intricately and harmoniously designed as to appear Wild, beauty in all of its myriad and excitingly varied forms, funky music, dancing freely, impassioned discussions, exploration, and learning more about the mystical undercurrents of our world and every magical and/or psychedelic tool that can be used to increase awareness of those undercurrents, :) how to make the world a better place and increase the freedom, satisfaction, love, harmony and true success in life enjoyed by all beings in this realm. And, you know, other stuff :) But that's a good starting sampler, I think...

I've been reading voraciously since before kindergarten, books were and are definitely one of the primary pillars of my true education. That being said, it's difficult to pick favorites but here's a few: Endgame (by Derrick Jensen), In the Absence of the Sacred (by Jerry Mander), The Cosmic Serpent (by Jeremy Narby), Ain't Nobody's Business If You Do (by Peter McWilliams), PIHKAL + TIHKAL (by Alexander and Ann Shulgin), pretty much all of Anne Rice's books but particularly The Vampire Chronicles (I love her extravagantly sensual and visual writing style, not to mention enjoying more than a few similarities between myself and The Brat Prince Lestat), the Ishmael series (by Daniel Quinn), Chuck Palahniuk's novels (though Fight Club is the only movie I've enjoyed more than the book, and I did love both), JRR Tolkien's whole pantheon, the Ender's Game series of books, and too many more to mention. As for music I love the good stuff of many genres, particularly fond of the blues, hip-hop, classic rock, psybient, psychedelic dub &amp; dubstep, beach folk, southen gothic, all kinds of stuff really, some more well-known favorites of mine include Jimi Hendrix, Tech N9ne, Jack Johnson, Mozart, Rage Against The Machine, Xavier Rudd, Chuck Berry, Eminem, Bach, The John Butler Trio, Led Zeppelin, Jurassic 5, Beethoven, Immortal Technique, Ben Harper, Tool, Enya (yeah I said it!), The Doors, Vivaldi, Shpongle, Nitty Scott, and Danney Alkana. But I'm down for just about anything, and I love singing, humming and drumming as much as life itself =) And movies, my favourites are The Imaginarium of Doctor Parnassus, Mister Magorium's Wonder Emporium, and lots that I'm not thinking of, maybe Avatar, I'll have to give that one another watch to decide but it was enchantingly amazing to see at a theater in 3D.

Without doubt the most amazing thing I've ever done was to fly for a short while in Waipi'o Valley on the Big Island of Hawai'i. Quite a tale I will gladly share if you like =) Some other amazings things I was blessed to do over the years include climbing to the summit of the volcano Haleakala from Pukalani on the island of Maui and upon looking down from a rock on the peak seeing my shadow below me on a bed of clouds fully encircled by a rainbow, and also jumping off the top of Rainbow Falls on the Big Island of Hawaii, swimming with sea turtles (na honu!) and dolphins (na naya!) in their wild habitats off the coast of O'ahu and Kauai, walking a jaguar and a mountain lion in the lowland jungles of Boliva, and vaporizing DMT to enter Hyperspace. The list goes on and on, really, what a many-splendoured, wondrous world we live in! :)

Couches and beds are wonderful things, but there's something sublime about traveling around with a tent and a sleeping bag (or nothing but a backpack if you're somewhere it doesn't rain much!) and giving Mother Nature a chance to host you as often as possible =)

Quite likely whatever they need, though most of my education and experience and passion is in the fields of health /medicine (preferring the natural but have studied tradtional as well), pharmacology, physical fitness, mythology, permaculture, astrology, ethnobotany and sacred plant medicine, psychology/counseling/therapy, and meditative practices in a variety of spiritual traditions. Also if your house is in a state of transformation at the moment and you're in need of a hand doing light construction, gardening, painting, redecorating etc. I've got some experience there and am happy to join a helping hand in those endeavours as well =)