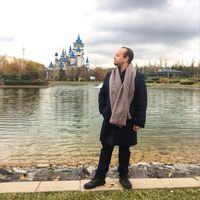 Work hard, share, get the paper. Go out backpacking, learn a couple languages more. I had a bigger description here, but since nobody reads anything these days I'm not bothering writing my a$$ off.

To prove I'm not a Turkish con artist, here's my personal Instagram profile below:

We are what we choose to be. Everything is an illusion.

One of my dearest friends, Paula Gramacho, told me about this website when she was going to her trip to Rio, in July, 2010. Since then, I just had good moments hosting people and going to meetings.

I've spoke with different people of different nationalities in my home town, Portuguese, Arabs, Germans, Spanish, Italians, etc. My hometown (Florianópolis) has a lot of beauty and I like to show and talk about it with others.

Hosted Antonella and her boyfriend Luis (Argentina) for 2 days

Travelled to Argentina and surfed at Luis' Couch

Surfed at Gabriel Gonzalez apartment in Rosario, Argentina for 5 nights.

November 2019: Hosted by Anna and Marek in Saint Petersburg for 4 nights.

As a whole, I'm a tranquil guy and I can talk about anything, everything.

But I'm no fan of movies tho'

I love reading humanities and also some other best-sellers

Swimming with an Anaconda in a river at Bonito-MS. It was one of the scariest too.

Seeing snow for the first time in my life at Charles De Gaulle Airport on the way to Russia.

Teaching Portuguese /English language in a camp for young Ukrainians

I know basically everything about my state, I've visited every single city, and I know a lot about other Brazilian cities. I can teach you about history and philosophy, some stretching, drawing lessons, a bit of boxing, learning Portuguese and so on. I want to practice my language skills and learn about different cultures.