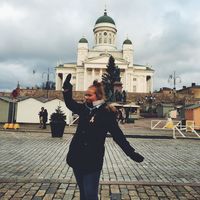 Unfortunately, I have never surfed before..but I have met some truly amazing friends via Couchsurfing, friends I still keep in touch with and whom I consider some of my best friends!

My most treasured book is Ética para Amador by Fernando Savater. I used to always carry that book on my travels. I also love To Kill A Mockingbird, Les Jeux Sont Faits and Phantom of the Opera. Also fond of reading about speciesism, feminism and whiteness.

It's impossible to name just one thing, so I'll name a few!

In the summer of 2013, I took a spontanious trip to Japan right after graduating high school in Denmark and moved to Texas to work shortly upon my return. Unfortunately, this did not work out (let's just say I wasn't exactly cut out for the au pair-job!). A couple of months later, I flew to South America to volunteer at a hostel in Argentina and to visit friends in other parts of the continent. The hostel became my home and I'm often told I lit up when I talk about my time in Buenos Aires. It wasn't easy to leave and my heart is yet to heal, but it did help that I, a month or so after returning from South America, could hop on a plane to Scotland; and so began the most character-defining journey of my life.

I found my magic in Buenos Aires. South America in general was a revelation, which is why I have the entire continent tattooed on my ankle. Particularily, hiking the Corcovado in Rio and seeing the Redeemer in real life is something I'll never forget. I also spent my 3rd semester of university abroad at Rhodes College in Memphis, Tennessee - definitely also on the list of amazing things I've done.

A sense of home, even if it’s just for a brief moment. :)