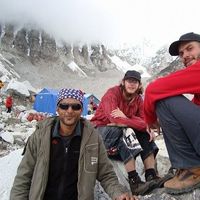 Transmogrify into a Pterodactyl!!!

I have my eccentricities. I used to carry around a hurley at all times with very few exceptions. I am on a trial seperation. My goal in life is to be a failure according to Western standards. I don't want the material things, like a house, a wife, two cars, two point three kids, a big tv, a massive stereo system or anything like that. All I want is my backpack and whatever I can fit in it and that gets reduced everytime I move to a new country. My eventual plan is to travel with the clothes on my back and my passport in my pocket. I want a myriad of memories and experiences for my future. Calvin says it best here on the fourteenth comic. This strip is what made me want to live me life as I do.

The greatest description of friendship I have ever seen.

This talk of a recession and everything doesn't bother me, as I earn money to spend it. I save money for a while when I work, then I spend it all, then I work again and save only to go and spend it all. Everything I earn goes towards food and travel. I am a traveller, who wants to see everywhere. I feel the earth is our legacy and that we have every right to go wherever we want. I feel borders do not exist, we do not choose where we are born so I feel patriotism isnt worth the effort, we should abolish borders and visa requirements and let anyone go anywhere. Travel is a major part of my life and I strive for the travel life.

I talk a lot and joke a lot and can be very vulgar and crude at times. My friends would tell you more about me so if you need to find out, just go ahead and ask them about me.

Always have a Zombie contingency plan

"Too often... I would hear men boast of the miles they covered that day,rarely of what they had seen" -Louis L'Amour.

One last quote from a gaggle of couchsurfers in Salzburg who put this one together.

Don't ever go anywhere just get everywhere because its not where you go its how you got there.

"The healthy wayfarer sitting beside the road scanning the horizon open before him, is he not the absolute master of the earth, the waters, and even the sky? What housedweller can vie with him in power and wealth? His estate has no limits, his empire no law. No word bends him toward the ground, for the bounty and beauty of the world are already his." -Isabelle Eberhardt

An American tourist complimented a Greek fisherman on
the quality of his fish and asked how long it took him
to catch them.

"Not very long," answered the Greek.

"But then, why didn't you stay out longer and catch
more?" asked the American.

The Greek explained that his small catch was sufficient
to meet his needs and those of his family.

The American asked, "But what do you do with the rest
of your time?"

"I sleep late, fish a little, play with my children,
and take a siesta with my wife. In the evenings I go
into the village to see my friends, dance a little,
play the bouzouki, and sing a few songs. I have a full
life."

The American interrupted, "I have an MBA from Harvard
and I can help you.

You should start by fishing longer every day. You can
then sell the extra fish you catch. With the revenue,
you can buy a bigger boat.

With the extra money the larger boat will bring, you
can buy a second one and a third one and so on until
you have an entire fleet of trawlers.

Instead of selling your fish to a middleman, you can
negotiate directly with the processing plants and
maybe even open your own plant.

You can then leave this little village and move to
Athens, Los Angeles or even New York City! From there
you can direct your huge enterprise."

"How long would that take?" asked the Greek.

"And after that? Afterwards?"

"That's when it gets really interesting," answered the
American, laughing. "When your business gets really
big, you can start selling stocks and make millions!"

"Millions? Really? And after that?"

"After that you'll be able to retire, live in a tiny
village near the coast, sleep late, play with your
grandchildren, catch a few fish, take a siesta with
your wife, and spend your evenings singing, dancing
and playing the bouzouki with your friends..."

Besides the obvious, Travelling and meeting people. I enjoy dancing, I have taught a few people swing dancing (though I make it all up as I go along). I am interested in playing hurling and gaelic football. I like watching rugby though I have never played. I watch plenty of sports on tv (well I did when I had one). As listed elsewhere, music and books and films. pretty much my main interest is meeting with and hanging out with my friends.

Is there a God?

Music Very hard to describe for anybody what specific music they are into. I could type for days and not get everything I like in here. The first CD I ever bought was U2´s greatest hits and moved on to rockier punkier sounds from that. From there I moved onto a very punk and metal liking. I have always loved rock in most forms and always will. In my travels I have gained an appreciation for many types of music, right now my personal favourite is swing music from the 50s. I love Jazz and Blues. Some new wave Celtic rock, or nu-trad is great. I own a tambourine that Eddie Vedder smashed onstage and threw into the crowd. I got to see the Frames for free. I hung out with all the heavy-metal heads in Cuba. I´ve been to gigs in different parts of the world and still love it. Music is a way of life that without it people would be lost. Add in music under any of these headings and you will probably find something I like. One thing I don´t go for is music made through computers, if it is not created by musicians with instruments I won´t be able to appreciate it, but as with everything there are always a few exceptions to the rule. Films I have seen a lot of films, and to write down a genre I like is hard. Depending on my mood I will watch what appeals. I add some films under here that I found amazing. I think Tim Burton and Terry Gilliam are geniuses, some of the truest forms of genius making movies today."Star Wars", "Intermission", "Donnie Darko", "C.R.A.Z.Y.", "Arlington Road", "Los Diarios Motocicletos", "La Haine", "Was tun, wenn's brennt?", "Charlie Bartlett", "The Nightmare Before Christmas", "Tideland" "Ferris Bueller's Day Off" Click Here and scroll down to number Four, it will blow your mind! Books Books have always been a major part of my life. When life becomes too dull you can just sit and read and enter so many new worlds and lives. When I was young I didn´t like my life so much, which is why books are great, I have lived many lives in these pages. Books are the lifeblood of learning, and though school may be important to some, you should never underestimate the teaching ability of a good book. Some books added under here."Hitchhikers Guide To The Galaxy", which gives one of the best quotes for a traveller,"Dont Panic!" -Douglas Adams."Calvin and Hobbes" - Bill WattersonAnything by Terry Pratchett.

Calakmul ruins and nature reserve in Mexico. Nowhere in my life have I seen so many stars and felt so alone with the past.

"Better far off to leave half the ruins and nine-tenths of the churches unseen and to see well the rest; to see them not once, but again and often again; to watch them, to learn them,to live with them, to love them, till they have become a part of life and life's recollections." -Augustus Hare

I can teach you the square root of pi to the millionth decimel, oh you want me to tell you? Yeah wait I need to go to the bathroom, I'll be right back,wait riiiight there ok.
*whistle*
*runs to Mongolia*