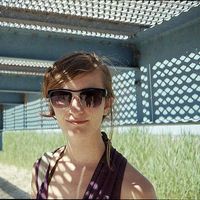 I'm a slow thinker and much better at writing than I am at speaking. But I try.
When I'm not working I read, write, go to art galleries, make ceramics, sew, hike, do yoga, play tennis, bike ride, cook and love play cards over any alcoholic drink.
My CS profile may say "Wants to Hang Out" but I am willing to accept travelers here and there despite this status (I just leave it that way sometimes because otherwise I get overwhelmed with requests). If you think we would get along, feel free to shoot me a message to see if I'm available to host.

Here's some good quotes that aren't mine, but that speak the truth better than I could:

-"I am the wisest man alive, for I know one thing, and that is that I know nothing." -Socrates

aun aprendo and another from my favorite man in literature,

"Journalism is a great field to get into, if you make sure that you get out of it."
-Aldous Huxley

Kayaked for 6 days, 150 miles by river from my university's campus to Lake Michigan, a journey half-way across the state of Michigan.

Danced as an extra in a music video for Mason Proper (Safe for the Time Being).