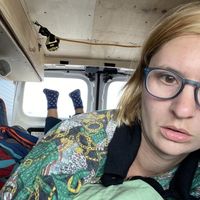 (update: January 2021) left NYC to live in a van across the country so back to surfing from time to time! Vive le vaccin !

not really sure. this is always a tough "social network" question. i don't have facebook, or have fleas, isn't that all we're really looking for in life? no? ok, i aim low. but really, read perhaps what people say about me here on this them here page and you'll get a better idea than from what i could provide. no really.

ps. it's all about the turdburgle.

pps. name's pronounced say-dee, like lady, not SAD-eee, no being sad jokes allowed!

well, i guess "don't be a dick" is important. but then, maybe i should get used to the fact that there are some weird ass mo fo's out there--the dick kind since weird people are generally pretty cool actually--so maybe i should learn on my dick-people tolerating abilities. again, its not you its me.

Update: Living in NYC (again) with cool roommate and she actually said we could try couchsurfing! So I deff won't be accepting everybody all the time, far from it I'm sure, but probably single females can be welcome at certain times -- single guys too but we'd prob start with a girl and all. So if you're reading this, who knows where we are in that gender evolution so shoot me a message. Living near Park Slope, all subways and buses are at your reach. I work from home though so it would be pretty great if you can entertain yourself outside of the house n such. But totally flexible to most arrangements of what you and I both need.

I have lived outside the states for 10 years off and on since high school, but am living in states for now.

Surfed, hung out with, or traveled with around 150 couchsurfers I reckon and have had amazing times. One or two really bad times, too, how's that for honesty? Would love to talk about them and swap bad stories!

Help me help you.

I once woke up to a negative review, written FIVE YEARS after the "encounter" with a woman I did a trip with in NZ. It was absurd. I was accused of extortion and it was full of negative female expletives. I used the gift of a command of the English language to correct and point out what had happened and why she was pretty nuts. She deleted the ref. Kiiiiinda wish she hadn't. Let's meet and write insanely off-base negative references about each other pleassseeee? Who's up for it???!

ahem, ok ive put together some cs specific ones....BEING A VEGETARIAN (update: not anymore), light mountain biking, in fact, biking of aaaany sorts, even motored ones! you playing guitar for me, yoga, er, but not the naked kind, indoor sleeping, when possible, especially after many nights outdoors, woks! let me know if you got one, c.o.f.f.e.e., sunsets that are easy on the eyes, electric blankets, book exchanges, good books!! website exchanges too, like, can someone please tell me where are the free ebook downloading sites, i know they are out there! stars, and learning about them, maps, gifts, walking, hiking and running, together or alone! koalas, animals in general, cats, spicy food, any food, haircuts! let me know if you want to experiment on my hair! or restyle me in general, thanks!

love love love!! too much too much. isn't this category normally split in to three spots? what am i supposed to do, put Wilco next to Le Petit Prince next to Team America: World Police????
I just did.

billy here found a raccoon down by the watering hole, it had got itself tangled in some razor wire we use for the chickens, mostly to keep the hens safe from the foxes, but this raccoon had gotten itself snared, i said, 'billy, don't you go and hurt that raccoon, he didn't do nothing to those chickens', but billy kept right on creeping towards the poor critter, he had on one of his bb guns strapped around his back, that Pa had given him for the season. 'bill-llleeey', i shouted, but he just kept on creeping, crawling now, on all fours, towards the endangered animal, caught there, unable to move lest it cut deeper with the wire in to its own skin. just then, a flock of birds flew from the trees overhead, billy stopped, mesmerized, looking at the birds cover the sky like one black blanket eclipse over our heads. billy didn't hurt the raccoon that day. billy never did hurt another living thing in his life.