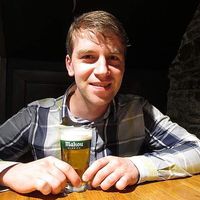 Socialize in order not to get lost in virtual world.

I'm 31 years old and I feel still young enough to try to take the most of my life.

My adventure with travelling and learning other cultures started a few years ago when I took advantage of EU Youth in Action Programme, later I did my Erasmus studies and placement in Spain. Then came a moment to head to the east so I went to Ukraine to do my year long EVS. I started in Donetsk, moved to Odessa for summer and ended up in Chernivtsi. Without doubs, it has been the most amazing year in my life. Much to tell about it.
Next I decided to come back to the roots and now I'm working as a computer programmer in Warsaw.

To gain the knowledge and experience and share it with other people to be a helpful hand to them.

Although I signed up some time ago, when I finally moved out abroad I got a chance to fully participate in CS. I hosted a few people and found a couch couple of times too.
In spite of the fact I'm a computer programmer I'm really open to people and curious about people, how does everything work around, especially things I've got no clue about and I'm still processing 'the answer to life the universe and everything', he he.

I'm interested in almost everything, starting from history, psychology, maths, newest achievements on the field of physics, languages and ending on philosophy of life. That's why I love to meet new interesting people who started to gain the knowledge from a different point of view, but they are going in the same way. One of it is Wikipedia, where I can get lost for hours moving on from one site to another.

I cooked an octopus, cut it with scissors and fed 4 people. They really liked the taste!

I really enjoy talking about languages (e.g. etymology) , cultural differences, travelling. I'm more towards listening than speaking but if anybody is eager to talk so I'm taking the floor telling jokes.

I can fix a computer, teach some English, Spanish, poor Ukrainian and Russian and of course Polish. I can prepare a delicious Polish dish, barely play 3 songs on a guitar, tell something how to go abroad in frame of some UE and different programmes. I can tell you how hot is in the south of Spain, how do oranges taste in Portugal in summer and how to cook an octopus.