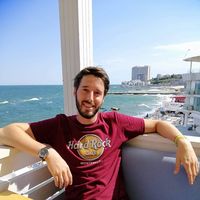 'lil notice: I usually don't accept couchrequests for more than 2 weeks in advance. I'm not a big planner and i like to keep my schedule open and flexible. Cheers!

Oh and also please first send me a MESSAGE and only when i send you a message back and i ask you to send a couch request only then send me one. Thanks! If you send me a couch request right away, i will probably not host you. Notify me that you read this when you message me :)

Also pls read the next few lines:
i'm not likely to host people who:
- have no references
- just signed up a few weeks ago
- come with more than one person
- who write another name in their message or request to me.
And to be sure: I am not a hotel where you can "check in" or make a "reservation"
:-)
If you are not pls read further :-)

Well i'm an adventurous guy. I love vacation, traveling, exploring and (extreme) sports like boarding, windsurfing, mountainbiking, bungy jumping, stuff like that. I can also be a lazy bum though and stay at home all day 8-) I'd like to host (international) people and hopefully be hosted in return.
hehe i've had the same description for years.. had a look at it every now and then but didn't really know what to add to it or what to change xD

One couchsurfer said the description looks simple yet not superficial at all, and i guess i kinda liked that.. but i would like to add something.. so.. let's see :P

now that's a deep question of which i'm sure i will answer later :)

(this exact sentence has been here for 4 years now already... )

Ok here's a philosophy: I want to live my life to the max. look on the bright side of life. aim to be a winner but don't care if you lose, if you don't try you'll never succeed. Do you get a "no" as a response? just ask the question to someone else who might say yes instead. Live poor and live rich, reach the extremities of life, only once you've been sad you can truly experience happiness, live safe and live dangerous, stay in bed all day on one day and go everywhere do everything the other day. You have nothing to lose and it's not the end of the world! Take a random bus without knowing its destination, book a flight to a place you've never heard of, sneak in a cinema and watch a movie, cycle through an indoor shopping centre. Do a bungyjump, let the adrenaline rush every now and then, be naughty, be bad don't feel shy don't care what others think, do what makes you happy, love life and live love. Be young be wild be free be adventurous.

Hosting, surfing, activities... i do it all.

I was in Spain for 5 months to explore the country, learn the language and have an adventure generally. There i heard and learned about couchsurfing, but didn't actually use it. Then in Holland i decided to look for a couch in Vlissingen before i started living there. I found one and stayed there and it was very good, the couchhost was very nice and friendly.
beginning of 2010 i went to Stockholm and got hosted there for a night. In March/April 2010 i went couchsurfing in Barcelona and Madrid. Then when i lived in an apartment in Vlissingen and we had plenty of space and mattresses to host people i had a few groups come over, 3 americans doing a cycling trip. One weekend a french couple And 2 German girls. And another time also 3 cycling girls from Belgium.
And yeah just here and there some hosting and some surfing!

Blablablabla lot more surfing and hosting after that but you can tell by reading my references :)

Read the other parts.

well yeah.. i've left this one empty for a looong time cause didn't really see the use of it and couldn't be bothered to think of all the great movies, music and books i appreciate.. but i'll start now and see if i'll add something later.

Bollywood has produced some horrible low quality movies in the past which gave itself quite a bad name, so a lot of people when they hear of bollywood now they think of those crappy movies, but bollywood nowadays makes great great movies, some are way better than the last 50 hollywood movies i've seen (sorry America :p i still like plenty of ur movies too though) but so my number one movie recommendation at the moment is (a bollywood film ;)
and it's called: 3 idiots. Yeah i know the title doesn't sounds like a great or sophisticated movie, but so i was even more surprised when i was watching it and actually found out that this is the best movie i've ever seen :) So yeah look it up!: 3 idiots.

Oke this is maybe why i've never filled out this part on couchsurfing before.. cause i'll just ramble on about one movie :P

Adventure!I've seen and done sh*t loads of awesome adventurous things :P but i won't just spill out all my stories! A few things though:

I've played the piano in the house of India's president :D
Rode a motorbike in India, Brazil &amp; Thailand in several places,
Did a 134 meter bungee jump, twice.
snuck into the VIP area of the sambodromo with carnival in Rio de Janeiro.
Did kitesurfing.
Jumped off a mountain in Rio de Janeiro (parapente / paragliding) and in Gran Canaria (Spain).
I did a bunch of scuba dives, that's amazing, it's a complete different world already 4 meters below the water surface.

Countries throughout Europe i've been to:

Countries throughout the world i've been to:

praticall skills: i could teach you windsurfing, bodyboarding, flowboarding.
I'm interested in learning any skills. I like learning new things.