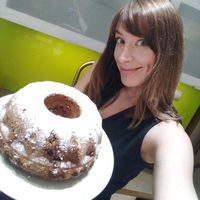 I like to meet new people and love to show them Prague or just chat and grab a beer. :)

If you need just some advice about basic stuff (public transport, taxi, money...) or where to go/ what to do in Prague or wanna hangout, just write...

I 'm not a review collector but have seen more then 50 people from here, you can see some pics of us in the photo gallery.

I don't have much time to read any other books else then about programming and computers. But love Neil Gaiman, Terry Pratchett, George Orwell...

My favourite places in Prague.