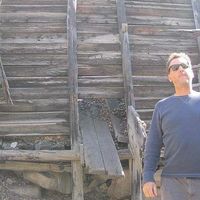 To consciously experience as much as I can.

My friends would say that I am a really nice guy, that I mean well, and you may or may not get used to that thing he does. I really don't have a thing, so I would say, don't listen to them. They would of course go on about how fun I can be, and how light hearted and free spirited I wish I was, but just can't quite pull it off what with all those eccentricities. They would say that I probably like my motorcycle better than them, and some days that would be a very true statement. The chicks would say that I am a flirt. And a few might say that I am even charming. They would say that I like to dance but maybe shouldn't because I just look too funny. Other than that I have no clue, and that's really because my so-called friends don't spend near enough time telling me how cool I am. I love my friends despite their obvious faults.

Music, strange little divey bars and funky bands, and strange and funky people. Interesting people, interesting looking people really grab my attention. I am trying to pay more attention to things around me because I have noticed that there are a lot of really neat and cool things in this life, and they don't always reach out and grab me. That puts some responsibility on me to at least act like I am participating in my own life. I like to spend my time with people I like, people who make me laugh and bring out those qualities that I am sometimes afraid to let show. I love riding my motorcycle, and I love having someone on the back enjoying the ride with me. I like meeting new people and staying up really late every night of the week! Well, some sleep is good. I like letting people show me who they are through things that they find interesting and enjoyable. I am pretty self-centered, but am making the effort to, at the very least, acknowledge that there are other people here. I like to try things that I haven't tried before. One thing that I believe I work toward is the idea that I am here to have the full human experience, and if I may be so bold, I would like the cajones to tell Life to Bring. It. On!

Lucinda Williams in concert with a relatively unknown guitarist named Blake Mills. Being at the ocean. being in the presence of the mountains. Getting to see the raw and stellar talent at an open mic night at a now defunct coffeeshop called Sweet Rockin' Coffee. Being there while my son was born.