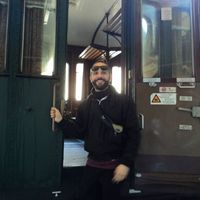 We don't have a planet B!

I like mostly heavy music and electronic, I prefer whiskey (Laphroaig is my favourite), Sambuca, wine and beer more than cocktails and sweet drinks. Sometime I think I was born in the wrong place...as I have been loving Scandinavian countries since I'm child (Sweden is my fave); I like almost everything from there (music, culture, design, architecture, people and Carl Linnaeus).
I would define myself as European or world citizen rather than Sicilian or Italian, I am proud of my roots but I prefer to include rather than dividing: from Helsinki to Palermo and from Lisbon to Warsaw, with all the differences, I love this continent!
I'm maybe not that party animal, I like to hang out with friends having drinks and meeting new, interesting and funny people, I like live music and do not despise nightclubbing sometime (with all the implications :)). I can party hard, but I know the limits and I'm always able to go back home walking on my own feet. I also like spending time at home reading, playing, music listening and movies watching.
Last but not least, I am agnostic and not really into religions (apart for the historic/cultural perspective), I don't have any problem with people that believe in something, but if you're self-righteous or you believe that your is the only truth. Racism and nationalism do not belong here (and does not fit the CS philosophy).
If you do not agree with these statements, please skip it and go to the next profile.

There is no planet B... try to keep it clean: save, recycle, reuse!

After 12 years of being a respectful member of this community, I have got a negative feedback (and not only) which made me pretty sick!
I am not the person described in that negative reference, I have never annoyed or made anyone uncomfortable and I am not trying to seduce every woman I host or meet. But I don't want to deal again with such judge(mental) people in the future!
This section is now under review and will be updated soon!

I couldn't live without Rock'n'Roll and all its derivatives! I like to play loud my Gibson with tons of distorsion! I Like cinema and travelling (i would not be here otherwise:)). I like politics, many people can say it's bullshit but it's about our lives, do not let someone else choosing for you! I'm a biologist and I like natural sciences rather than biotechnologies. Plants and insects are my passion. I like trains and when I will retire, if possible, I would like to make a nice diorama with stations, mountains, tunnels etc.

I like lots of movies but my favourite is definitively "The Big Lebowsky" it's a lifestyle more than just a movie for me! As second comes "The Kingdom" from Lars Von Trier. My favourite directors: Coen Brothers, Woody Allen, Martin Scorsese, Spike Lee, Jim Jarmush, Ciprì &amp; Maresco, Tim Burton, Monthy Python and many others. I like old Italian movies ("Il sorpasso")and also some new ones: Gomorra, A.C.A.B.! Ah, I can't forget this: Princess Mononoke!It's hard to list my favourite bands or artists but I can say Tool, Kyuss, Slayer, Carcass, Wolves In The Throne Room, Queens of The Stone Age, Motorpsycho, Kvelertak, Black Sabbath, Electric Wizard, Ufomammut, AmenRa, Alice In Chains, Soundgarden, Isis, Neurosis, Refused, Arctic Monkeys, Pavement, Sonic Youth, Bjork, Sigur Ros, Godspeed you Black Emperoror!, The Knife, Anticon, Antipop Consortium, Arcade Fire, Jim O'Rourke, Johnny Cash, Daft Punk, Chemical Brothers, The Bloody Beetroots, some French Rap, just to give an idea of the music I like. I would say I like almost any genre of music but reggae or ska get me bored usually after 30', I can't stand raggamuffin, some sort of popular/world/folk music and Italian popular singers (Laura Pausini, Eros Ramazzotti, Zucchero, Tiziano Ferro etc.). I prefer indipendent music more than MTV's stuff, but sometime I like also some "catcthy" song.
Want to know more about my music preferences? Just check my last.fm: http://www.lastfm.it/user/peppebdf
Book: I like James Ellroy, Douglas Adams, Philip K. Dick, JC Ballard, Luther Blisset (or Wu-Ming), Dostoevskij, Bulgakov, Stefano Benni, Swedish death metal (Daniel Ekeroth).

Travelling one month around Mexico with my backpack and a Routard guide, without any plan! I only knew when I had to come back!
Sonisphere festival near Zurich (re-named Muddysphere after) with Linda.

I can teach: some guitar chords, cooking pasta aldente, rolling cigarettes (or something else;)), recognize plants, some Italian.
I would like to learn: some advanced guitar chords, French, Swedish and almost whatever I don't know!!!

I am willing to meet nice people and make new friends. I do not host just to provide a free place to stay, some times I also I host during the weekdays (not sooften though) even if I can be tired after work, I always try to set up some free time to hang out, have some drinks and and introduce my friends. People that are too tired to hang out or have no money for a couple of drinks, are not welcome, you are already saving money if I host you, so you can invest some to make a new friend.
I AM NOT HERE TO PROVIDE A FREE SHELTER AND I NEED TO SEE THAT YOU ARE INTERESTED IN MEETING ME!