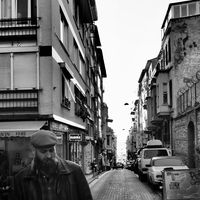 Moved to Asia when I was 18, travelled around there for 7 years. Gradually shifted my life to eastern Europe, living in interesting places like Crimea and Saudi Arabia along the way. Addicted to reading the news, reading history, and reading in general. I like trying local street food, simple cheap old cafes, that sort of thing. I like to explore how everything is nuanced, complex and open to interpretation. We all live in myths, dreams, narratives. Nature, animals, and children make me happy. I don't drink but I'll go out.

Life is about being true to yourself and helping others do the same.

Btw, I cannot register guests with the police and I have no spare key. Sims with data here are less than €3: VIP mobile, exact centre of the city, Kneza Mihaila 9, 9am - 10pm. Can make life easier.

Some people or communities feel more full of, or driven by, heart and soul than others. I don't really care about 'seeing the sights' or 'seeing the world' anymore, I just want to chill with those people or in those places. I also like to spice it up with unhinged eccentrics as long as they aren't too much of a liability.

Honestly, I'm getting bored with the dominant themes of contemporary social/political/economic discourse, they feel stale and faulty to me. I believe any attempt to engineer society on the assumption that humans are rational will fail, but that's no reason to despair. The world is awash in reductionism, false dichotomies and hubris masquerading as rationality. I'm resonating more with Dostoevsky's change of heart after standing before the firing squad, or C.G. Jung's quip 'who looks outside sleeps, who looks inside awakens.' Perhaps maturing is the process of realizing you're not the centre of the universe, a journey away from vanity that some never make. The conclusion life has led me to is that zealous faith in human reason and technology rather than in a higher power, like say, love, or the murky caprice of subconscious human nature, is a precarious, egotistical intellectual luxury, a sign that one is only familiar with a small, safe corner of what it means to be human. That's ok, it's the norm today and social pressure has a much greater effect on what people believe than facts or introspection. Let's just not come at each other like we've got it all figured out.

Herodotus' Histories, Guns Germs and Steel, The Great Game, From the Holy Mountain, Homage to Catalonia, The Making of Global Capitalism, Bad Samaritans, From the Ruins of Empire, Liberalism: A Counter-history, Decline and Fall of the Roman Empire, Romance of the Three Kingdoms, Soul Mountain, Notes from Underground, Envy by Yuri Olesha, C. S. Lewis.