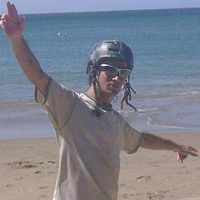 well I'm Costa Rican, but I consider myself a citizen of the World...hahaha...as cheesy as that sounds...I surf and do a lot of mountain biking, I also play guitar with a couple of bands...I can't sit still and have been known for putting together the most random trips around :Dcan't get enough thrill of not knowing exactly where I'm going or what's gonna happen, expect the unexpected! xDI love to find shortcuts/dirt/alternative/scenic roads when driving around, get off the beaten path as they say ;)

I live my life as though this day was going to be the last one! Enjoy life as much as posible! live now and worry about it later I say...

I enjoy potlucks a lot, I think it's a great way to meet fellow couchsurfers that live or happen to be traveling nearby.I have surfed several times and I have hosted travelers in two of my previous apartments.

I've met several cool people around...going to potlucks and couchsurfing with new people is a great way to learn new cultures, lifestyles, cuisine, drinks ¿? (why not!)

Music is a MUST! I play guitar and enjoy going to as many concerts as possible! Writing new songs is a great feeling, just getting the urge to play it live kills me! Adrenaline is part of my life...can't live without it! Extreme sports are ALWAYS part of my normal week :D Get togethers with my friends and family are vital! can't go for many days without hanging out with 'em!

When it comes to music, I like a lot of different stuff...I play electric guitar with 3 bands back home.

I saw Iron Maiden getting sabotaged at their last show as part of the Ozzfest 2005 by no other than the Osbourne Family (not including Ozzy of course...he didn't even know what was going on).I camped by myself without any other human contact for a couple of days in the Estonian Forest next to the coast. It takes a while to get used to being ALONE with yourself...enjoyable after you accept it ;)I toured part of South America, Central America and Mexico as part of Paul DiAnno's Band.Got to do stuff in Cuba that real Cubans do, not the Cuba they sell to tourists.

I ALWAYS get a kick out of learning new idioms and slang from all over...I like sharing my new finds as well :D