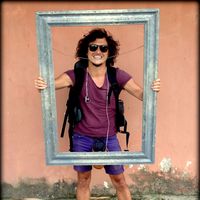 PLEASE NOTE: should you send copy/paste request my response will be (most probably) negative.

A Polish lad who got happily stuck in Saigon and can't get enough of it. Living, working and keep on exploring the country as well as the region for some time now. Huge fan of travelling by motorbike and always willing to share dos and don'ts.

Other than that I like to think of myself to be a rather attentive and easy-going lad. Hardly ever reluctant to hold a conversation. Driven by a passion to life, people, travelling and a challenge to leave the familiar to discover the unfamiliar ;)

Learning through experience &amp;
exposing myself to as many fascinating events as possible
before realizing one is too old and tired to carry on with such an approach any longer. Fingers crossed it won't take place any time soon.

2)
If for some reason can't provide the shelter, I do my best to substitute it with some sighseeing instructions

Up until recently, I did spent a considerable amount of my student time on travelling, and have been around a bit (for my standards). Due to it, I was mostly being hosted than I hosted myself. Nonetheless, I did save few lost souls in Ibiza and twice in Cracow.

I tend to pay attention to anything that seems new to me and allows to expand horizons. Though travelling, literature in general, photography, politics, music, cultural initiatives and cinematography (especially what's called "classic films") are my main fields of interest.

In general stuff done by:

Permanently evolving. However, in particular genres such as:

As far as literature is concerned, I value a vide range of subject and find it extremely crucial in my existance.

The authors I've selectively read so far, and met my appreciation are as follows:

None amazing. Quite a few interesting worth sharing in reality, when accompanied by a decent atmosphere, and perhaps a glass of red or a pint.

In certain circumstances (i.e. when NOT miserable, hung over, hungry and thirsty), could strive to indicate why it is better to " always look on the bright side of life" than to sit and cry over the pathetic existence :P