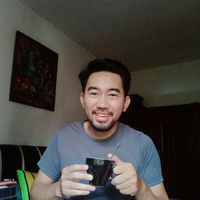 To introduce indonesian cultures to everyone

Hello, my name is Hadi, i love very much meeting new people, i am an easy going, i also love travelling when i have free time. Hosting new friends make me knowing other cultures

Let it flow like water in the river, as i dont know what i am going to face in the future.

I knew this couchsurfing from friend of mine when i travelled to jogjakarta and stayed with him. I like this idea to make new friends.
I rate this 5 stars.. :)

Hmmm...well
Before i knew couchsurfing, i hosted some friends, they are as the following:

1. Wilma and Claartje from The Netherlands

Hosted my CS's friends, they are as the following

6. Catherine and Shany in august 2014 from Canada.

7. Mirza from Indonesia and Jana in august 2014 from Cezch Republic

8. Aga from Poland and Quentin in august 2014 from French

10. Fede from Argentina and Chloe in august 2014 from French.

11. Alison and her 2 years old son, Nico in september 2014 from United State of America

21. Andrew from Russia and Lera from Lithuania in April 2015

29. Matthieu from French and Andrea from Canada in Jan 2016

42. Merijn from The Netherland and Bhavya from India in June 2018

67. Vlad from Canada and Veronica from Ukraine in Mar 2019

70. Candas (John) from Turkey and Christian from Mexico in April 2019.

84. Narmeen from Mauritius and Iskandar from Malaysia in March 2020

Movie, pets, travelling and love to hang out or chill out with friends.

I like action and colosal movies. I like easy to listen for the music, i dont read a book yet as im quite busy at work :)

So far i have not experienced something amazing,perhaps meeting you as new friends make me feel amazing :)

I love to teach other people and love sharing knowledge of my experiences.