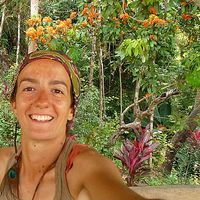 Learning as much as possible!

I am a opened mind person who likes sharing knowledge and experiences with others. My life is travelling.

Enjoy each day as if it was the last one!! I try to be a optimistic person, whatever you want to do or became in your life is possible. BELIEVE!!

I have been surfing with CS in Asia and now in France. When I was living in Reunion Island we had CS guests at home.

I discovered Couchsurfing when travelling in Asia, and I had a great experience. I met so many interesting people and shared great moments with them.

Learning, it´s one of the reasons why I love travelling. I also like cooking, making handicrafts, listening to music and going to concerts, nature, doing trekkings, diving, snorkelling, going for party!!!!

I was selling handicraft in the beach in Brazil and after having sold several handicrafts to a foreigner I discovered that he was Neil Gaiman!!

I can teach some languages, sharing cooking recipes, making handicraft, massages, making bread..
I would like to learn new languages, photography, making clothes..