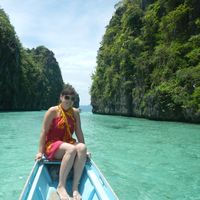 To see as much of the world as possible - Collect moments, not things...

I love nothing more than discovering new things. Travelling is top of my priority list and I like to go to at least 2 new places each year and stay off the beaten track. Best way to see the country as it is &amp; learn about the different cultures.

Love eating out, days on the beach, getting dressed up for nights out, and trying new things.. Such as learning to surf (which I failed miserably at), or anything I haven't had the chance to do yet (jumping out of planes, diving, zorbing, the list is endless..)

We're here for a good time - not a long time.

I have couch surfed, but yet to host anyone.

I couch surfed in Mexico for four days, and loved it! You meet so many people and experience the culture as it should be.
I also couch surfed in Dubai - met brilliant people this way!

I keep myself fit by pole dancing, which I've been practising for years, and love it!

But am always up for learning new things, languages included. So if you teach me a new talent, I'll teach you one of mine! :)

Any movies, apart from scary ones..

Sailing around the British Virgin Islands, seeing the sun rise over the Whitesundays, learning to surf in the Mexican sea, island hopping the Philippines, there are so many more...