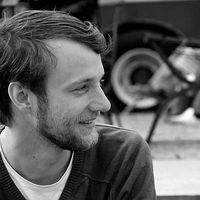 "You are a soul driving a meat covered skeleton made from star dust"
What more could possibly be said?

I am not witty enough to fill out this field.

- playing guitar
- scouting
- travelling
- meeting new people
- history
- English
- finding stuff on flea markets that I can show my students in history classes ("Look at that, kids! It's a real 19th century cooking pot!")
- to complete this rather nerdy list: geocaching

- I am a huge fan of the discworld books by Terry Pratchett.

- If someone sits down with me and explains them to me I really like Shakespeare's plays.

I really like listening to The Cat Empire, Yalta Club, Imagine Dragons and Balkanbeats music

I once was the youngest citizen of the German Democratic Republic.
I hiked through the Israeli sand.
I walked over the summer ice of Norway.
I saw the Japanese rain forest in a taifun.
I experienced the frozen Niagara falls in Canada.
I went to the Australian red sand.
I had a headache on the salt plains of Bolivia.
I jumped off a bridge in New Zealand.
I lived in the Athens of the North in Scotland.
I can find lots of different verbs and activities to avoid saying "travel"

If you are interested in historical facts about Greifswald, Germany, then I can help you because I used to be a tour guide there.

I can teach you a joke in German.