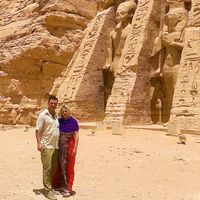 Temporary: I have the months marked off on our availability calendar but am still getting requests to host. I am sorry, but we cannot host anyone for the next three months (April, May, or June 2022).

I travel almost weekly for fieldwork, so advance requests are not an option. Please do not request more than a week in advance.

If you are local, do not ask us to host because you are moving, are in between apartments, etc. That is not why we do this. We want to help travelers.

The family is all about adventure but in our individual ways. I am an archaeologist and love it. I work in Arizona, Nevada, New Mexico, Texas, Idaho, Montana, Utah, Washington, Wyoming, Oregon, Oklahoma, Florida, and Alaska. Every day in the field is a good day.

My husband is a sports photographer for a university. He has shot everything including the Olympics and 16 Super Bowls. He has also covered fires, murders, hostage situations, and won a Pulitzer for his photos.

We have the cutest and smartest dogs named Big (Miniature American Eskimo) and Audi (Alaskan Klee Ki). Every Couchsurfer falls in love with them.

Friends say I should write a book with all the stuff we have done: two summer rim to rim hikes across the Grand Canyon...110 degrees at night; crash expensive New Year's Eve parties; worked as extras in a couple movies; was an alternate for two seasons of Survivor...yes, the TV show; my obsession with Halloween; a Zombie for Zombie WarZ (people shoot Zombies with paintballs), and all the crazy things as an archaeologist.

We want to help those who just need a night or two during their trip/journey/adventure to make it cheap, relaxing, and safe.

Movies: Clue, Raiders of the Lost Ark, The King's Speech, Mulan (1998), Return to Me, Facing the Giants, National Treasure, My Big, Fat, Greek Wedding, Letters to Juliet, Baptists at our Barbecue, Brave, Rocketman

I completed a six-month, solo, desert archaeological survey that covered 6,500 acres with temperatures over 118 degrees F. In that time I hiked over 800 miles and located 145 previously unrecorded archaeological sites. When I got to the end, I turned around and covered the same area again to do the second phase of the project for the next six months.

Best year of my life!

People all over the world are more alike than we think.
I am not naive, but I believe most people are good.

An interest in their local history, stories of the real America (NOT the media version), and a great sense of humor!