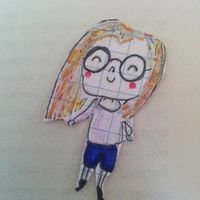 I'm from a small town in the southwest of England. (It's the place where they filmed Hot Fuzz!) I did my undergraduate degree at Leeds University, in Spanish and linguistics.
Two years ago, I lived in Melilla, Spain, teaching English. Spent a lot of time in Morocco while I was there. Had a very special experience, and thus my love of travelling was born!

During quarantine, I was working with homeless people as a support worker. After spending lots of time at home, contemplating the things in life that matter and finding ways to include more of them, I decided to cut all ties and book a one-way ticket abroad. What lockdown? I am currently in Portugal somewhere.

Some of my favourite things are: languages, documentaries, festivals and beaches. I'm a passionate feminist and talented daydreamer. I can play 2 instruments and I love to sing and write.

Alone, I think my time is best spent with a book, in nature, or doing something creative.
With company, I enjoy sharing stories and wisdom and trying new things.

To learn about the world from the people who know it best.

Broken in to Glastonbury festival