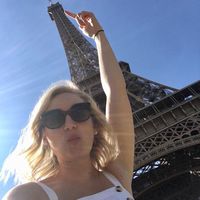 I'm Tara, I'm living in LA as a flight attendant :) I'm very adventurous and love meeting international people and sharing experiences with others. Born and raised in the Bay Area/Silicon Valley, I love the beach, skiing, partying, dancing, and traveling of course :)

I used to co-organize for the Silicon Valley CS meetup group, I've couchsurfed in multiple countries and hosted in my San Francisco house!

-Caving under the city of Budapest
-Riding on the back of a motorcycle through the Black Forest in Germany
-Skiing in the Austrian Alps
-Dance on stage at a reggae concert in Munich in front of a thousand people on NYE
-Zip lining through the Costa Rican rainforest
-Spending 5 weeks with family in the South of France
-Couchsurfing on a yacht off the coast of Croatia
-Drinking too much at Oktoberfest in Munich
-Seeing my dad get 2nd place in Worlds Water Polo in Riccioni, Italy
-Experiencing both Carnaval and the World Cup '14 in Brazil
- Flying to London for the gay pride parade
- Solo backpacking Southeast Asia
-Snorkeling in the Papua New Guinean coral reefs

….but what really gives me joy, is helping others on their trek around the world.