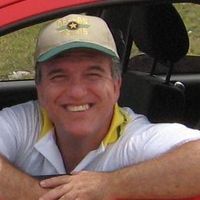 FIRST, A DISCLAIMER:
My city is JUIZ DE FORA, state of Minas Gerais, not RIO DE JANEIRO, which is the capital city of the state of Rio de Janeiro. Please, look at these on Google Maps. Juiz de Fora is somehow close to Rio de Janeiro (around 180km or 112 miles), but not that close to spend the day there and come back just to sleep here, ok? You would last NO LESS THAN 6 hours on the road just to go and come back!!! This is not worth it, as you can now realize. So, please, take this into account BEFORE asking me to host you here if Rio de Janeiro is your main interest, not my city (which has no touristic interest).
NOW, ABOUT ME:
I graduated in Civil Engineering, but my postgraduate formation (both master and doctoral levels) is in the Computer Science field. I am now a retired Computer Science university full professor and investigator (Software Engineering and Databases).
In my spare time I am immersed in traveling plans and getting to know people all around the world. I see myself much more in Human Sciences, as I realized. I do like other cultures, life, art, and related stuff.
I am a sort of “easy-going” person, used to deal with young people from 18 to 25 years old (as a university professor). Sometimes very understanding, sometimes very “hard” concerning education. I do not smoke (never in my life) and do not make use of drugs or alcohol. I can drink a bottle of beer, or some wine or whatever, this is not a problem. I do not like Coke and any other sort of soda, although I can drink them. I do prefer natural juices.
I am very concerned with religion’s matters, but I do not profess any religion although I was raised catholic. Also, I really don’t care about politics or sexual orientation of third parties, being very respectful to whatever.
For those who Horoscope or Zodiac mind (not my case, just curious), I am Virgo sign. Here are some Virgo traits:
- Strengths: Loyal, analytical, kind, hardworking, practical
- Weaknesses: Shyness, worry, overly critical of self and others, all work and no play
- Virgo likes: Animals, healthy food, books, nature, cleanliness
- Virgo dislikes: Rudeness, asking for help, taking center stage
The very point is that all these completely match with me, my personality. Something to think about! :-)
MY HOBBIES:
I have always been very fond of other cultures, their roots, their folklore, handicrafts, and languages. Of course, I am very fascinated with traveling and experiencing all this "in live". I have friends, really, at the four corners of the planet. I am fanatic about international cuisine and very much looking for trying typical dishes, being able to eat anything (not in any way or anywhere!). I like to fly; and I have a private pilot's license! I also like to dive and I have a diver's license. However, I have been away from these hobbies for a long time! Between the air and the sea, the "mean" may be different, but the feeling of freedom is the same and this is what I like the most! I have already ventured from ultra-light and gliders, but never from hang gliders and parachutes, but I confess I have a lot of will. My last attack was flying on a balloon. Too bad these hobbies are so expensive!
Find more about me on my Facebook page: https://www.facebook.com/tarcisio.d.lima.9

This is, for sure, a sort of “two-way lane”, a two-way perspective:
WHILE HOSTING:
Although my hometown JUIZ DE FORA (please, google it or map it to know more) is not a touristic place but far more a university city (14 universities!), I do expect to have the chance to host people from diverse places, not just Brazilians but people from all over the world. See the section “My home” to see details on how I can host you.

Also I have a small apartment where I can host up to four. Here a list of who has already been hosted there:
- Ricardo Rhomberg and his wife Marcia (from Rio de Janeiro, Brazil)
- Guilherme de Souza Fonseca, his wife Janaina and their two kids (from Florianopolis, SC, Brazil)
- Luiz Gonzaga Fonseca and his wife Ana Maria (from Florianopolis, SC, Brazil)
- Hernán Cobo and 3 of his friends (from Tandil, Buenos Aires, Argentina)
- Naly de Carvalho and her husband Ricky (from Washington, DC, USA)
- Abel Pires and his wife Marcia (from Itabira, MG, Brazil - 5 nights, August 2017)
- Shree Ram Dangal (from Kathmandu, Nepal - 5 nights, September 2017)
- Heloísa Figueiredo (from Rio de Janeiro, RJ, Brazil - 2 nights, September, 2017)

WHILE SURFING:
I use to travel a lot but intending and planning to travel much more. Being hosted by locals is, for sure, the best way to get to know real people, real life, culture etc.
I am really interested in knowing more than only touristic spots, those places local people point out as being the best places in their hometowns, not the usual or conventional ones. That is what I am looking for!

Besides, even if you are not able to host me of being hosted by me, we should not lose the opportunity to meet up and hang out. So, at least, let’s arrange this!

First, one of my main interests is Computer Science Education. I professionally belong to the Computer Science Department at UFJF (Federal University of Juiz de Fora) where I teach Computer Science.
Besides, in my spare time, I am always dealing with traveling. I am always searching the web for interesting places to go, bits of advice from people who have already gone on their blogs, and so on.
I do like to practice other languages than my mother language. Also, if you are interested, I can teach you some Portuguese, why not? Just ask for!
While traveling, art, and culture from the people and places that I am visiting is part of my real interest. I am especially interested in handicraft work. Nature also calls my attention.

I am not the sort of person who is involved in music, movies, and in-depth literature, so I do not want to name or point out favorites.
I can read whatever is in front of me, whether in the waiting room of a dentist, a doctor, a barber (even propaganda pamphlets I like to read!), and elsewhere – In this sense, I am a compulsive reader! Newspaper I read up the classified's section! Books? Lately almost only technical literature, in English - which is a shame! I always intend to "recycle" the reading of classics of the national/international literature, but this project is always being postponed. I can deal with novels and short stories, generally non-fictional books. I like poetry a lot.
I like from classics to pop music, but not heavy metal.
Talking about movies, I like from documentaries to drama, excluding horror movies. Some sort of science fiction is also OK, others not.

I have done so many amazing things, let’s say, related to travel! It is difficult to choose just one but let me tell you about the amazing places that I have already visited:
- “Tierra del Fuego” and its surroundings, at the extreme south of South America, belonging to Argentina
- The Isle of Capri (and the top of the close by Vesuvio volcano), and also Sardinia and Sicily (also the top of Etna volcano), in Italy
- Greece – what a marvelous country!
- The Autonomous Region of Galicia (northwest of Spain), in particular, the city of Santiago de Compostela;
- The state of California, USA (although I like Georgia, the peach state, and also Florida, the sunny state)
- The Colombian Caribbean, including Cartagena de Indias
- The Kruger Park (on a 5-day safari!) and the Garden Route in South Africa
- Also in South Africa, I've been to the Cape of Good Hope (remembering our history classes with the Great Navigations) and the exact point where the Atlantic Ocean ends and the Indian Ocean begins (the point where those oceans meat)
- The Easter Island, on the Polinesia, belonging to Chile

In Brazil, my home country:
- The “Fernando de Noronha” archipelago
- The Amazon region, north part of the country, the lung of the world
- The Devil's Cave, São Paulo State
- Florianopolis City (intimately, Floripa)
- Santa Rita do Ibitipoca (the village and the natural park), very close to Juiz de Fora, my hometown.

One must also consider some "icons" as:
- The top of the World Trade Center in New York (what a pity it does not exist anymore!)
- The Golden Gate Bridge in San Francisco, which I have already crossed on foot (round-trip)
- The Eiffel Tower in Paris
- The Leaning Tower of Pizza in Italy
- The Parthenon in Athens, Greece
- The top of the Burj Khalifa, nowadays the tallest building in the world in Dubai
... an endless of these places that every tourist, let's say "on their first trip" do not fail to visit!

It was also amazing crossing the Andes Mountains in my car and lucky enough to visit Mount Aconcagua (at the same time the highest point in the Americas and the entire Southern Hemisphere).

However, it does have an amazing thing that I should not forget: being on the top of the Empire State Building, in New York City, on the Millenium New Year's Eve (2000-2001). I was on the Empire State Building on December 31st trying to buy a ticket for the next day or on. Suddenly an old man arrived with tickets he bought for him and his wife, very expensive VIP tickets for that night that they were not able to accomplish, I cannot remember why. The most important point: that man that I never met before did not sell the tickets, but just gave them to my friend and me. Isn’t it amazing? It was a dream being in NYC by that time of the year, but could never imagine on the top of the Empire State Building on that very special night!

I used to teach Computer Science at a federal university, specifically, Information Systems and Databases subjects.
I like to learn about people, culture, traveling. I wish I could have much more knowledge of arts in general, photographing.
I like to share my traveling and life experiences.

In addition to my place, for sure, I would be very proud to be as helpful as possible as a host or a guest. I also have a small apartment where I can host up to four people.
I am excited about exchanging traveling experiences. I can share mines, you can share yours. That is the best way to get to know people. I love it!