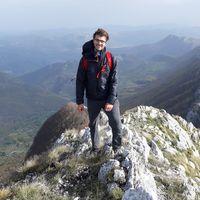 Nice to meet you

I'm Timo (in italian it means thyme). Currently based here in Napoli with a flat and a job, but originally from Germany.
I love being outdoors in the mountains

️ or on my road bike

Write a few lines why you would like to stay with me, it it's very likely I will accept

Every single soul I have met during my travels was giving me something.
Now it's time to return the favor!

Let me be your guide // tourist information

A good start can be found here:
https://goo.gl/maps/UGMe2sVziJSLNd6E6
That is a list of some of my favourite places in and around Naples

I love to spend time outside in the nature (preferable the mountains). No Matter which season.

1️⃣ A trekking tour over the whole South island of New Zealand. 🇳🇿

Not sure which one was worse!