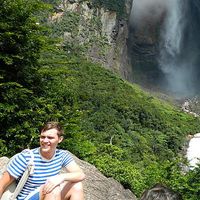 I haven't been as active since I moved away from Montréal, but I'm always happy to help the CS community!

Continuing to do the above. Preferably simultaneously.

Music involving a piano, violins, cellos and feminism or, better yet, that has been left to age for at least a century in a cool, dark place.

Biked across the volcanic terrain of Iceland to dance around a midnight bonfire in celebration of the summer solstice. Interned in Caracas and slept in a hammock near Angel Falls. Won a free trip to Russia. Took the Trans-Siberian from Moscow to Vladivostok. Hitchhiked in the Faroe Islands with an affable Finn. Saw a play I wrote get performed.

Teach me to speak, cook and think like you. I'll teach you how to say 'sorry' too often and the proper method of drinking bagged milk.