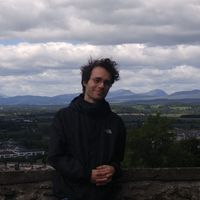 Damn this is tougher than I thought! Ok, I... am (quite) a bit geeky, I love music, movies, games, comics, I love debating anything and everything, I love food, I love... actually you know what? Just come for a beer and we'll get to know each other! (Or the drink of your choice, obviously you can have wine if you want, coffee, juice... or maybe just a conversation? Or even silence, I guess we could share a silence together too... but then I guess I could just put some music on.)

While meeting interesting people, having wonderful conversations, exchanging stories and sharing knowledge is all fine and dandy, I'm really just on Couchsurfing to find players for our board game nights.

Music? I like classical music (from the 16th to the 21st century), jazz, rock, metal, electronic, bluegrass, funk...

Books? It's a bit difficult to say without just giving a detailed list. I'm always in the process of reading something so suggestions are welcome! Some examples of stuff I like: the Song of Fire and Ice series, Foundation, Immortality, One Hundred Years of Solitude, In the Country of Last Things, Transmetropolitan, Watchmen, Silmarillion, My Favorite Thing Is Monsters, Guns Germs and Steel.

Seeing one of my compositions being played by an orchestra, and getting one of my board games published! It's called Decrypto in case you wondered :)

I could teach you jazz guitar, french, music theory and how to make the best lemon pie in the world.

I can share any of the above with my hosts plus I would be happy to make a meal or pay for drinks.