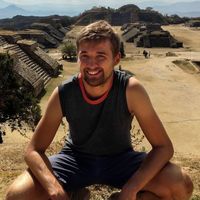 I am from Paris, France and I moved to Mexico in 2015, now living in Guanajuato Capital, Mexico.
I make videos (comercials mostly) for a living, if you are interested check out :

www.facebook.com/timoferr or vimeo.com/timof
I'd say I am a rather sociable and joyful person (I know it sounds so generic !).
I was born and raised in Paris and I was a guide during 4 months for Fat Tire Bike Tour Paris.

I have had only really good experiences in Couchsurfing so far.
What I enjoyed the most is the social diversity of the people that hosted me, some were living in rich houses, some in homemade houses, others in truly modest appartment. But what they all had in common was their kindness and wilingness to share something with me something else than just money (may sounds a bit cliché, but that's true).

I love shooting video and editing video, well it's my passion in life 😉
I am also a sport addict I enjoy climbing, riding my bike and running 😊

- Went to Joey Starr's birthday by accident (a famous french rapper)
- Climbed the Berghain (a known club of Berlin).
- Went from Paris to Amsterdam in Tandem (video proof :p https://youtu.be/RNKnppfjiQE)

I can teach you photography, video editing, and also french, english and spanish :)
I am now learning portuguese.
I would like to learn more about DIY stuff 😁
I like motivating people into overcoming their limits, especially when it comes to sport (running or climbing)

Coach you in sports, teach you video making or make you a little video 😁