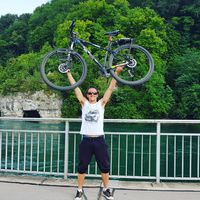 I am from Patagonia Argentina, and I have been traveling around the world for many years. I could say this thing of traveling made me the person who i am right now, very courious in cultures and languages.
Right now living in Copenhagen, especting to stay at least until october 2020, sharing an apartment with friends and especting for you to come and share your adventures and experiences.

Please before asking for a request read my profile.
I won't accept request for the coming few weeks/months and this is because I can no compromise myself since I never know where I will be the next month, or maybe I have a lot of work

I heard about couchsurfing in 2011, and i started joining CS events and hosting some people while I studied in Buenos Aires. After studying i had my first experiences as a traveler staying with locals. Starting with south america, and then moved to europe 3 years ago.
I want to help people to travel and have the best experiences, as it happened to me with hosts.

I am very courious on culture and languages. Playing the guitar, football and climbing
In the house we also speak several laguages if you want to practice there's some Portuguese, French, Spanish, German and English.
It would be nice to share at least a meal together.

I have traveled by bike through europe making more than 4500 km across europe, including the alps, the apenins and Corsica.