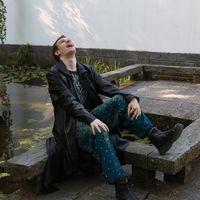 It's been quite a while since a rewrote my profile big style, so I've just been updating it yet again. (14th March 2017). And as every big trip changes me a bit, there's always changes to be made. (7th October 2017)

I've been growing up in a village in central germany and for a while, I was losing grip of reality, I did do nothing else than playing computer games and I probably wouldn't have gone out to the world ever. (There are reasons why all this happened but it doesn't belong here. Feel free to ask though, I'm an open book about everything.)

But then a change happened and I started going outside and oh boy, did that change my view of the world. The countryside around where I grew up is maybe not particularly astonishing, but it's outstanding to me and I loved walking around the fields ever since that day I started to leave the house again.
And then one day, I started traveling around Germany all summer.
And then one day, I suddenly decided to move to London and travel around Great Britain. And even though I was used to things not working out, I fought for it. And if I'm completely honest, London is not a good city to live in. It's crazily expensive, you basically earn nothing, even finding a job is ridiculously hard but still I regret nothing. I grew up, I learned to be stronger and to fight for me dreams.

I spent 8 months traveling to 220 towns and villages and 11 national parks throughout Great Britain. And that was the best thing, I've ever done.
And then I came back, as a completely changed person. Every single person noticed that I've changed for the better.
And the summer after I came back, became the best summer I've ever had. Traveling yet again through Germany and then on towards, Poland, the Czech Republic, Switzerland, France and Andorra just showed me how much beauty there is in every single country. (I mean I've always believed in that, but now I've seen the proof.)

But after all that, I did settle down for a bit to concentrate on university. I've been spending my first semester with various week end trips and longer trips in the holidays, but as I recently added Swedish and Chinese to my studies (I'm studying Korean and Russian, so that makes it four languages at once now), I'll spend a bit more time at home studying now. I'll still be away traveling for all of the holidays and I'm definitely available and a lot more willing to host / hang out, so don't worry about that.

I once was a victim of bullying, which made me shy, introvert, anxious, having low self esteem, even being pessimistic and depressive.
But these years, all those changes and the beauty of the world made me being able to get back to who I really am - an extremely open, extrovert, self-confident, happy person with strong opinions and the will to fight for his dreams.
In the meantime, I did undergo some changes to my life and to how I value friends, which made me a lot stronger too. But you probably won't have to worry about that.

So I keep adding new things underneath here, which might make it confusing but it's chronological and I kind of like that. One thing I learned about myself in the Balkans is that I can be very extroverted, but also very reserved. I love being around people at all times and it's not that I'm ever not friendly, but sometimes, especially when I'm tired, I might seem a little less approaching. Don't ever worry if I don't ask a lot of questions. I always had little problems with not knowing how to show interest in people. So if I ever seem like not contributing extremely much (which doesn't happen a lot, I mean look at my references), it is really not meant bad. I just should be honest about it.

Okay wait, just hold up a second before you read the next part. My itineraries are... "a bit" crazy. I often travel with a remarkably fast speed. Also, while I stay in certain places for a longer period of time, I often visit quite small towns and villages that don't need a lot of time. So, just don't be shocked by the number of places in comparison to the mentioned time.

"Happiness is only real when shared." - This quote will always be stuck in my head because I found it to be true all my life. Might have to do with the way my life went, but I love having people around, I love making friends all over the world and share experiences, stories and just having a good time traveling alltogether. Thus, couch surfing is really helpful in doing so.

Back when I was in London, my friends around slowly lost the will to travel, so I started using couchsurfing to connect with locals in the places I went to and it helped me a lot and made my year abroad a lot better. And likewise, I believe couchsurfing enhanced my experiences in every country I used it in a lot. The most memorable experiences I can recall were in Poland, Italy, Portugal, Sweden, Hungary, Slovakia, Bosnia and Slovenia.

Now, having stayed in so many countries already, I definitely want to give something back. Which means at the moment I'm approaching a lot of people that have open requests, as where I live one doesn't get contacted much.

After moving into my new appartment, I took a huge liking on cooking and I do cook at least once or twice a day, so I'd be happy to cook. :)

Since I became obsessed with traveling, photography started to grow as one of my most important hobbies. I love the way you can picture the beautiness of a whole town in only one photograph and make people want to go there themselves. It's a great way of sharing the beautiness you can find all across the world.
If you want to check out my photography, you can find some at https://www.instagram.com/thelemonchicken/

Another strong interest, that might've been there a little longer then traveling are languages. Honestly, there's never enough time to learn all those languages I want to learn, but I'm trying my best to do so.

I'm really open to music of any genre and any languages, though I mostly dislike german music, hip-hop and reggae. Besides that, my taste in music has a really wide range.
My favourite bands and artists currently include: Paramore, Against the Current, Lorde, Fallout Boy, Twenty One Pilots, Veronica Maggio and some other barely known artists.
I often prefer non-english music due to the over-sexualization that is to be found in pop culture more and more every day, just that you know.

I used to really like movies when I was younger but I stopped watching anything but series. And even in the rare chance that I watch a movie, it's either horror, psycho or drama. My two absolute favourites (that probably no one ever will know) are "Battle Royale" and "Kokuhaku - Confessions".

I went from never reading to loving to read to writing my own story to abandoning that alltogether again. That's just life I guess. The only two books I'd recommend are yet again "Battle Royale" and "Confessions".

- Spending a year off between high school and university in a total of nine different countries (and shortly visiting three more), becoming a stronger, more mature, more positive and happy person along the way.

- Trying to hitchhike in Bosnia at night and ending up at a random guy's place in the beautiful countryside.

I might be able to pass along some knowledge in the five languages I'm speaking to some extent. (Besides the fact that I know random phrases in a massive amount of languages.)

Also, if you're looking to travel in a country I've been to, you can always ask me for my recommendations. When traveling with friends I'm always the route planner because I get to know a country and the must-visit-places in almost no time and often end up knowing the geography of the country better then anyone else. (Seriously though, that happened a lot in Britain, when even locals didn't know where random towns are located and I was just like a walking atlas.)
Also, I often know about the best deals, certain train passes, bus companies etc., to get around easily and cheap. (Yet again something important for Britain, because without that knowledge, you'd just throw your money out on public transport.)

Travel spirit and positivity is what I'd answer this one with. I'm always trying to motivate people to go out more, enjoy the beauty of what's around and to tag along on my crazy journeys. Whereas many people nowadays just visit a capital for a week and go back home or spend all their holidays doing nothing, I'm actively looking into a country, visiting even the smallest gems. When people look at my itineraries, they think I'm crazy. But I never met anyone who tried traveling my way and thought about it bad afterwards.