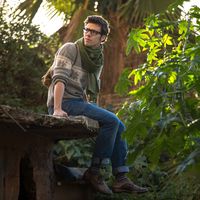 I'm a 27 year old Belgian historian who likes to travel around and gain experience. In 2013 I volunteered in a social development project in Dakar, Senegal, for 10 months. Since then, I love broadening my horizons and travel whenever I can.

I traveled one month in the north and the centre of Iran where I was often hosted by the most hospitable and caring couchsurfers. They didn't only offered me a place to sleep, they were also my local guides helping me in every situation and eventually they became good friends. I was traveling alone that month, but I never felt lonely for one moment.

I'm fond of the history and culture of the Middle East and North Africa and I'm trying to get to know these regions better by travelling.

I once went to Bolivia and saw the Salar, a gigantic salt lake in the middle of the mountains. To watch sunset over there was magnificent!