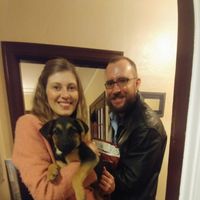 I´m French/Spanish, born in Mexico City, and raised between Mexico and California.

Besides my wonderful wife Margarita and little princess dog Mercuria Canica, my purpose in life is creating and spreading joy; and along the way, I also like good conversation, diversity of ethnicities, strong colors, different languages and cultures, and dogs that can fly!

There are no foreign lands, only foreign people. Borders are not a thing of nature, humans created them.

I hope to be able to meet interesting and stimulating people from around the world...and while traveling around the world; and continue to explore the many features that make all of us humans alike!

...also, I have had the joy of hosting hundreds of couchsurfers over the years!

Art and all manner of creative things, i love and depend on music to create art, i love good cinema..but above all, i enjoy observing people from different cultures and becoming familiar with all the interesting traditions they have. i also really like languages as well as history (any kind of history, as long as its in the past- I'm interested!)
...oh yeah..particle geography and astrophysics (including cosmology)are also big interests! (where am I, what am I made of, where did it come from???)

Meeting my wife in a Couchsurfing experience! (and the central Mexican desert is also unbelievable)